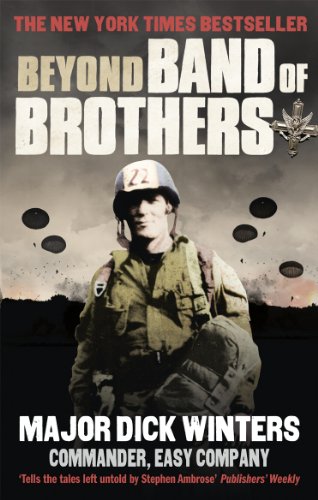 Beyond Band of Brothers
by Dick Winters

In Stock
£9.99
Dick Winters gives real insight into leadership under the most difficult conditions - every man in the company had been injured by the time they reached Germany - and tells the real story of the Allies' final defeat of Hitler, from the point of view of someone who was really there.
Very Good Good
11 in stock

Beyond Band of Brothers Summary

On D-Day, Dick Winters took off with 506th Parachute Infantry Regiment and prepared to parachute into German-held north France. Ground troops landing on Utah beach were relying on Easy Company to secure one of the causeways that were vital if the troops were to get off the beaches and reach the solid ground of Normandy. The plane carrying many of the commanding officers was shot down, leaving Dick Winters suddenly in command of his company. But during the drop he, and many of his men, had been separated from his equipment and was unarmed except for a trench knife.

In this remarkable World War 2 memoir, Dick Winters tells the tales left untold by Stephen Ambrose in his 1992 epic Band of Brothers. Starting with an account of the gruelling training designed to make the 506th the most elite unit in the US Army, Beyond Band of Brothers is fascinating account of one man's experience of commanding Easy Company from D-Day, to the Battle of the Bulge and into Germany. Dick Winters gives real insight into leadership under the most difficult conditions - every man in the company had been injured by the time they reached Germany - and tells the real story of the Allies' final defeat of Hitler, from the point of view of someone who was really there.

Beyond Band of Brothers Reviews

Praised as an exemplar of leadership, [Winters] shows here what he did to earn that praise, and how he did it * Booklist *
[An] extraordinary memoir * H. R. McMaster, author of Dereliction of Duty *

Major Dick Winters was born in Pennsylvania in 1918. He was one of the initial officers assigned to Easy Company of the 101st Airborne. Winters jumped into France on D-Day and commanded the unit now known as the Band of Brothers. Promoted to captain and then battalion commander, he led his men through the Battle of the Bulge and captured Berchtesgaden, Hitler's Bavarian retreat. Major Winters died in January 2011.

GOR003127360
Beyond Band of Brothers: The War Memoirs of Major Dick Winters by Dick Winters
Dick Winters
Used - Very Good
Paperback
Ebury Publishing
2011-07-21
320
009194158X
9780091941581
N/A
Book picture is for illustrative purposes only, actual binding, cover or edition may vary.
This is a used book - there is no escaping the fact it has been read by someone else and it will show signs of wear and previous use. Overall we expect it to be in very good condition, but if you are not entirely satisfied please get in touch with us.