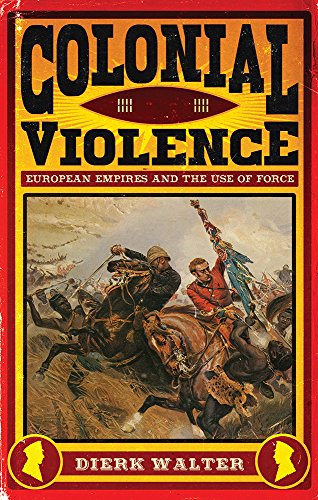 In Stock
£19.99
A comprehensive account of how Europeans have used violence to conquer, coerce and police in pursuit of imperialism and colonial settlement
New£19.99
5 in stock

Colonial Violence: European Empires and the Use of Force by Dierk Walter

Western interventions today have much in common with the countless violent conflicts that have occurred on Europe's periphery since the conquest of the Americas in the sixteenth century. Like their predecessors, modern imperial wars are shaped especially by spatial features and by pronounced asymmetries of military organisation, resources, modes of warfare and cultures of violence between the respective parties. Today's imperial wars are essentially civil wars, in which Western powers are only one player among many. As ever, the Western military machine is proving incapable of resolving political strife through force, or of engaging opponents with no reason to offer conventional combat, who instead rely on guerrilla warfare and terrorism. And, as they always have, local populations pay the price for these shortcomings. Colonial Violence aims to offer, for the first time, a coherent explanation of the logic of violent hostilities within the context of European expansion. Walter's analysis reveals parallels between different empires and continuities spanning historical epochs. He concludes that recent Western military interventions, from Afghanistan to Mali, are not new wars, but stand in the 500-year-old tradition of transcultural violent conflict, under the specific conditions of colonialism.

Dierk Walter is a lecturer in modern history at the Universities of Bern and Hamburg. His research focuses on the history of European expansion and Western military history since the eighteenth century. He has previously published a study on nineteenth-century Prussian military reform, and co-edited a number of volumes on military history and the Cold War. The translation of this work was funded by Geisteswissenschaften International - Translation Funding for Work in the Humanities and Social Sciences from Germany, a joint initiative of the Fitz Thyssen Foundation, the German Federal Foreign Office, the collecting society VG WORT and the Boersenverein des Deutschen Buchhandels (German Publishers & Booksellers Association).