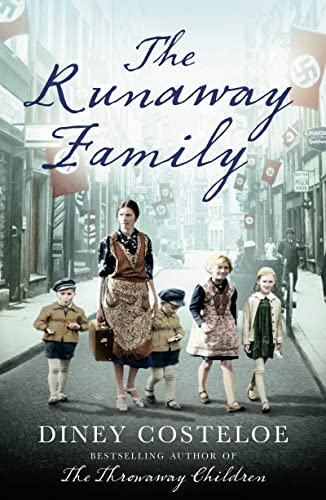 The Runaway Family by Diney Costeloe

A woman's struggle to defend her family and escape Nazi persecution in World War Two Germany.

The Runaway Family by Diney Costeloe

THE RUNAWAY FAMILY was previously published as EVIL ON THE WIND.

From bestselling author Diney Costeloe, a gritty drama about a mother's struggle to protect her family and escape Nazi persecution in World War Two Germany.

Germany 1937: Fear and betrayal stalk the streets. People disappear. Persecution of the Jews has become a national pastime.

When Ruth Friedman's husband is arrested by the SS, she is left to fend for herself and her four children. She alone stands as their shield against the Nazis. But where can she go? Where will her family be safe?

Ruth must overcome the indifference, hatred and cruelty that surrounds her as she and her family race to escape the advancing Nazi army's final solution.

What readers are saying about THE RUNAWAY FAMILY:

'A powerful and moving account of the dark era of Germany's history ... A story which needed to be told and should be read by people of all ages'

'I personally loved this book ... A harrowing insight into the lives of a young Jewish family at the beginning of Hitler's reign of terror ... A sound reminder of man's inhumanity to man!'

'My university studies had to go on hold for a while because I couldn't put it down!'

'Another great story by Diney Costeloe'

Diney Costeloe is the bestselling author of THE THROWAWAY CHILDREN, THE RUNAWAY FAMILY, THE LOST SOLDIER, THE SISTERS OF ST CROIX and THE GIRL WITH NO NAME. She divides her time between Somerset and West Cork.
GOR007400601
9781784972646
1784972649
The Runaway Family by Diney Costeloe
Diney Costeloe
Used - Very Good
Paperback
Head of Zeus
2016-03-24
416
N/A
Book picture is for illustrative purposes only, actual binding, cover or edition may vary.
This is a used book - there is no escaping the fact it has been read by someone else and it will show signs of wear and previous use. Overall we expect it to be in very good condition, but if you are not entirely satisfied please get in touch with us
Trustpilot