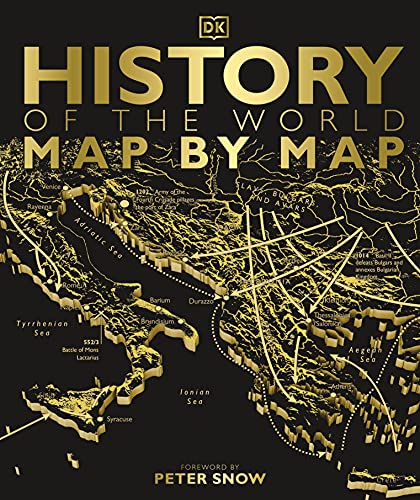 History of the World Map by Map
by DK

History of the World Map by Map Summary

History of the World Map by Map by DK

See history as it happened - from the evolution of early humans to the space race - with 130 detailed maps that bring pivotal episodes of world history to life.

Including a foreword by renowned broadcaster and historian Peter Snow, this history atlas shows you the history of the world in thrilling action. Follow Napoleon as he conquers Europe, explore the rise of the Roman Empire, or chart the progress of the Russian Revolution as each map presents an overview of the story then takes you, step by step, through how it developed, leaving its mark on land and ocean.

With cutting-edge design and breathtaking scope, History of the World Map by Map charts ancient, medieval, and modern history in all corners of the world. Discover how patterns of global trade, exploration, conflict, and technological advances shaped key moments in human civilization, such as the success of ancient Egypt, the conquest of Peru, the decolonization of Africa and Asia, the American Civil War, and the energy and environmental challenges of the 21st century.

Alongside the maps are overviews and timelines of important periods such as the age of ancient Greece, the Renaissance, and World War 2, while paintings and photographs introduce overarching themes and epoch-defining moments such as fascism and communism, and the invention of printing.

History of the World Map by Map Reviews

It's really easy to navigate and makes sense of the history of the world * Guardian Online *
These clear, detailed maps tell compelling human stories * History Revealed *
Rich in detail and endlessly fascinating * i newspaper *

Peter Snow, MBE, is most familiar to British readers since the 1960s as the face of tv election analysis. A highly respected journalist, author, and broadcaster, he was ITN's Diplomatic and Defence Correspondent from 1966 to 1979, and presented Newsnight from 1980 to 1997. An indispensable part of election nights, he has also covered military matters on and off the world's battlefields for 40 years. In 2004, Peter and his son Dan presented the BAFTA-winning Battlefield Britain for BBC2 and worked on the follow-up series, Twentieth Century Battlefields. Together they wrote two books to accompany the series, and they more recently collaborated again on the book Treasures of British History - the Nation's History told through its 50 Most Important Documents (2015). Peter has won critical claim on his own as a history author, for books including To War with Wellington (2010) and When Britain Burned the White House (2013).