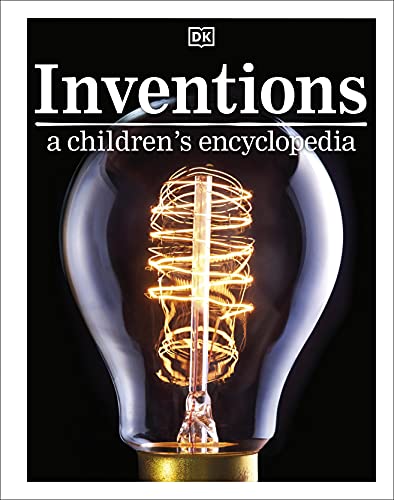 Inventions A Children's Encyclopedia by DK

Inventions A Children's Encyclopedia by DK

Discover the amazing inventions throughout history that have shaped the world as we know it.

This stunning visual guide explores and explains the greatest inventions, ideas, and discoveries throughout the ages, and introduces their inventors. From fire, stone tools, and the wheel to ploughs and paper, discover the first inventions that shaped societies and grew mighty civilizations and empires such as those in ancient Greece, ancient Rome, and ancient China.

In the centuries that followed, "Eureka" moments abounded, with James Watt's steam engine during the Industrial Revolution, Henry Ford's car assembly line at the start of the 20th century, the Wright brothers' flying machines, Thomas Edison's light bulb, John Logie Baird's television, and so much more.

Read about era-defining moments during the Digital Revolution, such as the first website developed by Tim Berners-Lee, and the growth in the use of robotics in industry and at home.

Inventions: A Children's Encyclopedia reveals the stories behind the crucial and quirky contraptions - products of the world's most brilliant minds.

It's informative, comprehensive, and filled with amazing pictures. Inventions: A Children's Encyclopedia is a reference book perfect for any family's bookshelf. * GeekDad *
GOR009207544
9780241317822
0241317827
Inventions A Children's Encyclopedia by DK
DK
Used - Very Good
Hardback
Dorling Kindersley Ltd
2018-07-05
304
N/A
Book picture is for illustrative purposes only, actual binding, cover or edition may vary.
This is a used book - there is no escaping the fact it has been read by someone else and it will show signs of wear and previous use. Overall we expect it to be in very good condition, but if you are not entirely satisfied please get in touch with us
Trustpilot