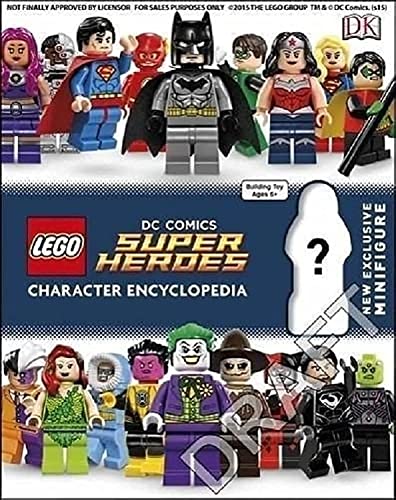 In Stock
£9.99
A comprehensive visual guide to the full range of LEGO DC Comics[trademark] Super Heroes minifigures, including LEGO Batman, LEGO Superman and their friends and foes. It also features facts and figures about all the characters from the LEGO DC Comics Super Heroes universe - including Green Lantern, The Joker, and Wonder Woman.
Very Good Good Well Read
Only 1 left

This awesome LEGO book features all your favourite LEGO DC Comics (TM) Super Heroes minifigures, including LEGO Batman, LEGO Superman and all their friends and foes. Plus the book comes with an exclusive LEGO Batman minifigure!

Be wowed by incredible facts and figures about all the characters from the LEGO DC Comics Super Heroes universe including Green Lantern, The Joker, Penguin, Poison Ivy, Bane, The Flash, Wonder Woman and more. Did you know that Harley Quinn's Hammer Truck has "whack-a-bat" scrawled on it? Or that the Batboat can float, drive on land and fly? Discover all the incredible details in the LEGO DC Super Heroes Character Encyclopedia sets, as well as the minifigures' special weapons, cool gadgets and amazing vehicles.

GOR009613758
LEGO DC Super Heroes Character Encyclopedia: Includes Exclusive Pirate Batman Minifigure by DK
DK
Used - Well Read
Hardback
Dorling Kindersley Ltd
2016-03-28
208
024119931X
9780241199312
Joint winner of Right Start Best Toy Award 2016 (UK)
Book picture is for illustrative purposes only, actual binding, cover or edition may vary.
This is a used book. We do our best to provide good quality books for you to read, but there is no escaping the fact that it has been owned and read by someone else previously. Therefore it will show signs of wear and may be an ex library book.