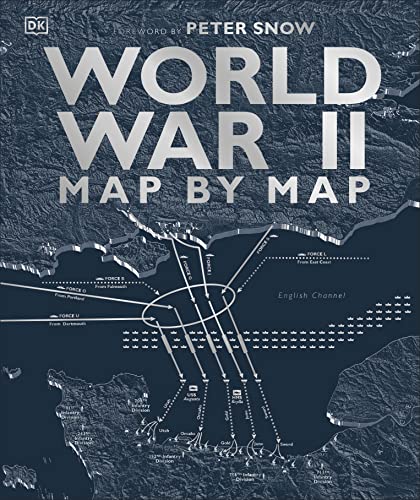 The deadliest war in history brought to life through bold, easy-to-grasp maps.

Follow the key developments of World War II in unprecedented visual detail, with more than 100 specially created and historical maps covering all major theatres of war. Layers of information show how the conflict raged around the globe on land, air, and sea, while timelines provide an in-depth chronology of events. Stunning archival photographs, contemporary artefacts, and profiles of famous leaders reveal the full story of the war that shaped the modern world.

Written by a team of historians headed by Richard Overy as consultant, World War II Map by Map examines how the most destructive conflict in history changed the face of our world. It is perfect for students, general readers, and military history enthusiasts. Includes a foreword by broadcaster and historian Peter Snow.

Richard Overy is Professor of History at the University of Exeter and one of Britain's most distinguished historians. His many works include The Bombing War, Dictators and The Morbid Age.

GOR010171092
World War II Map by Map by DK
DK
Used - Very Good
Hardback
Dorling Kindersley Ltd
2019-08-27
288
024135871X
9780241358719
N/A
Book picture is for illustrative purposes only, actual binding, cover or edition may vary.
This is a used book - there is no escaping the fact it has been read by someone else and it will show signs of wear and previous use. Overall we expect it to be in very good condition, but if you are not entirely satisfied please get in touch with us.