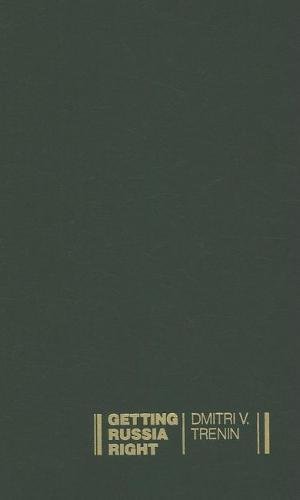 In Stock
£37.99
In the early 1990s, Russia seemed on the brink of fully shedding its authoritarian and communist past. It made significant progress through engaging the world community as an emerging market democracy, a returning friend and neighbor to Europe and the West, and a strategic partner of the United States.
Very Good
Only 1 left

In the early 1990s, Russia seemed on the brink of fully shedding its authoritarian and communist past. It made significant progress through engaging the world community as an emerging market democracy, a returning friend and neighbor to Europe and the West, and a strategic partner of the United States. The ensuing fifteen years of Russian history have witnessed several booms, such as the buoyancy provided by high oil revenues, and busts that resulted in retrenchment and centralization of power. What is the real Russia? Is the nation going in the wrong direction and becoming a threat-in-waiting, or is it moving along, and even forward, in a familiar three-steps-forward and two-steps-back pattern?
In Getting Russia Right, Dmitri Trenin sheds new light on our understanding of contemporary Russia, providing Western audiences with an insider's explanation of how the country has arrived at its current position and how the United States and Europe can deal with it more productively. Trenin looks beyond Russia's famous leaders to the economic and cultural spaces outside the Kremlin where promising changes are taking place. Russia is probably not going to join the West, but it is on a path toward becoming Western; capitalist even if not democratic; European in terms of civilization, rather than as part of the EU; and gradually more Western than pro-U.S.
Insightful and optimistic, Getting Russia Right offers policymakers, students, and stakeholders in the U.S.-Russia relationship an understanding of what Russia is -and is not. Russia will matter in the foreseeable future, and Trenin's innovative and objective analysis provides an understanding that is crucial to rebuilding relationships among the world's key players.

"Dmitri Trenin distills an enormous amount of wisdom in this concise, well written book. Russia matters, and the West needs to view it as an emerging capitalist society rather than a failed democratic polity. Property rights, a new middle class, and integration into world markets promise a way forward. Everyone interested in Russia should read this excellent book." --Joseph S. Nye, Jr., Harvard University, Harvard University "It is a pleasure to read a serious analysis by a Russian of contemporary Russia and its foreign policy that is not distorted by at best thinly veiled imperial nostalgia. One can agree with Trenin on many points and disagree also on many, but throughout one knows that one is dealing with a serious interlocutor, seriously concerned about the future of his important country--and who in some ways foreshadows the kind of elite that eventually will take Russia into the democratic West." --Zbigniew Brzezinski, Center for Strategic and International Studies

Dmitri V. Trenin is deputy director of the Carnegie Moscow Center, Russia, a senior associate of the Carnegie Endowment, and chair of the Moscow Center's Foreign and Security Policy Program, Russia. He has been with the Center since its inception in 1993. He is author of Russia's Restless Frontier: The Chechnya Factor in Post-Soviet Russia (with Aleksei V. Malashenko, 2004) and The End of Eurasia: Russia on the Border Between Geopolitics and Globalization (2002), both published by the Carnegie Endowment.

GOR009950269
Getting Russia Right by Dmitri V. Trenin
Dmitri V. Trenin
Used - Very Good
Hardback
Brookings Institution
2007-09-19
128
0870032356
9780870032356
N/A
Book picture is for illustrative purposes only, actual binding, cover or edition may vary.
This is a used book - there is no escaping the fact it has been read by someone else and it will show signs of wear and previous use. Overall we expect it to be in very good condition, but if you are not entirely satisfied please get in touch with us.