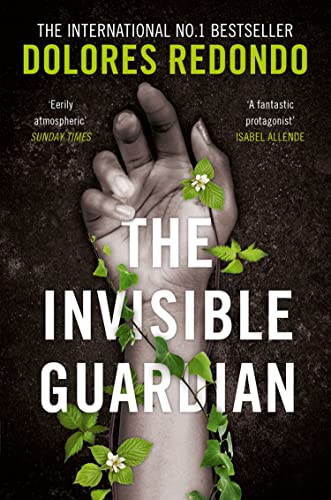 The Invisible Guardian
by Dolores Redondo

A killer at large in a remote Basque Country valley , a detective to rival Clarice Starling, myth versus reality, masterful storytelling - the Spanish bestseller that has taken Europe by storm.

The Invisible Guardian (The Baztan Trilogy, Book 1) by Dolores Redondo

A killer at large in a remote Basque Country valley , a detective to rival Clarice Starling, myth versus reality, masterful storytelling - the Spanish bestseller that has taken Europe by storm.

Shortlisted for the CWA International Dagger

The body of a teenage girl has been found on the banks of the River Baztan - the second in a month. Soon rumours are flying in the village of Elizondo. Is this the work of a serial killer, or something even more sinister?

Inspector Amaia Salazar leads the investigation, returning to the Basque country where she was born. Shrouded in mist and surrounded by forest, it conceals a terrible secret from Amaia's childhood that has come back to haunt her.

Facing the superstitions of the village, Amaia must fight the demons of her past in order to catch the killer. But what is the dark presence she senses lurking in the shadows?

`Myth and reality blend in this sophisticated and razor-sharp thriller ... gritty, fascinating and compelling' Steve Berry

this is a well-written book for those eager to explore a little-known area of Spain, and should appeal to fans of Fred Vargas and James Oswald. The supernatural elements are handled with a light touch, and shouldn't put off more cynical readers, Crime Fiction Lover

Dolores Redondo was born in Donostia-San Sebastian in 1969. She studied Law and Gastronomy. She began writing short stories and children's stories and in 2009 published her first novel, The Privileges of the Angel. The Invisible Guardian, first volume of the Baztan Trilogy, was published in Spain in 2013, with rights sold in thirty languages. She currently lives and writes in the Ribera Navarra.

GOR007228656
The Invisible Guardian (The Baztan Trilogy, Book 1) by Dolores Redondo
Dolores Redondo
The Baztan Trilogy
Used - Very Good
Paperback
HarperCollins Publishers
2016-01-25
432
0007525354
9780007525355
Short-listed for CWA International Dagger 2015
Book picture is for illustrative purposes only, actual binding, cover or edition may vary.
This is a used book - there is no escaping the fact it has been read by someone else and it will show signs of wear and previous use. Overall we expect it to be in very good condition, but if you are not entirely satisfied please get in touch with us.