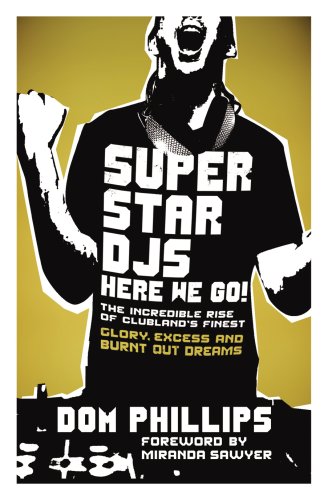 In Stock
£5.99
The plush, heavily branded 'superclubs' where they performed - clubs like Cream, Ministry, Renaissance and Gatecrasher - were filled with thousands of adoring clubbers, roaring their approval of their DJ gods.
Very Good Good
7 in stock

Superstar DJs Here We Go!: The Rise and Fall of the Superstar DJ by Dom Phillips

"It was about larging it. It was about pulling out a wad of 20s when you were buying your champagne at the bar. It was about buying your cocaine in an eight ball. It was about wearing designer clothes. At that top tier of that club scene, it was about giving it loads." With a foreword by music journalist, Miranda Sawyer, Superstar DJs Here We Go! is the full, unexpurgated story of the biggest pop culture phenomenon of the 1990s: the rise and fall of the superstar DJ. During the 1990s big names such as Sasha, Jeremy Healy, Fatboy Slim, Dave Seaman, Nicky Holloway, Judge Jules, and Pete Tong exploded out of acid house, becoming international jetsetters, flying all over the world just to play a few hours and commanding up to GBP140,000 a night. The plush, heavily branded 'superclubs' where they performed - clubs like Cream, Ministry, Renaissance and Gatecrasher - were filled with thousands of adoring clubbers, roaring their approval of their DJ gods. For the DJs and promoters, it was a licence to print money and live like a rock star. For clubbers, it was a hedonistic utopia where anyone and everyone could come together to look fabulous, take drugs, and dance the night away. But underneath the shiny surface lurked a darker side, a world of cynical moneymaking, rampant egos and cocaine-fuelled self-indulgence that eventually spiralled out of control leaving behind burnt-out DJs, jobless promoters and a host of bittersweet memories. They went from having the clubbing world at their feet to the world's biggest comedown. Dom Phillips - former editor of clubbers' bible Mixmag - reveals an enthralling and at times jaw-dropping account of flawed people, broken dreams and what really happens when it all goes Pete Tong.

Dom Phillips has been involved in dance music since 1988. He was editor of clubbers' bible MixMag throughout its 1990s heyday, and since worked as a freelance writer for publications as diverse as the Guardian, Observer Life, The Face, The Big Issue, Q, Arena and was for two years style columnist for the Independent on Sunday. He has also made a number of documentaries for Channel 4 and for Radio 1.

GOR001191993
Superstar DJs Here We Go!: The Rise and Fall of the Superstar DJ by Dom Phillips
Dom Phillips
Used - Very Good
Paperback
Ebury Publishing
2009-03-05
384
0091926939
9780091926939
N/A
Book picture is for illustrative purposes only, actual binding, cover or edition may vary.
This is a used book - there is no escaping the fact it has been read by someone else and it will show signs of wear and previous use. Overall we expect it to be in very good condition, but if you are not entirely satisfied please get in touch with us.