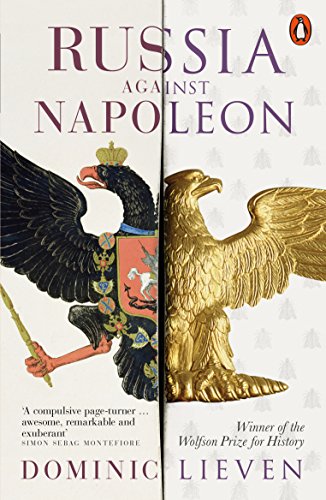 Russia Against Napoleon
by Dominic Lieven

Russia Against Napoleon: The Battle for Europe, 1807 to 1814 by Dominic Lieven

'A compulsive page-turner ... a triumph of brilliant storytelling ... an instant classic that is an awesome, remarkable and exuberant achievement' Simon Sebag Montefiore

In the summer of 1812 Napoleon, the master of Europe, marched into Russia with the largest army ever assembled, confident that he would sweep everything before him. Yet less than two years later his empire lay in ruins, and Russia had triumphed. This is the first history to explore in depth Russia's crucial role in the Napoleonic Wars, re-creating the epic battle between two empires as never before.

Dominic Lieven writes with great panache and insight to describe from the Russians' viewpoint how they went from retreat, defeat and the burning of Moscow to becoming the new liberators of Europe; the consequences of which could not have been more important.

Ultimately this book shows, memorably and brilliantly, Russia embarking on its strange, central role in Europe's existence, as both threat and protector - a role that continues, in all its complexity, into our own lifetimes.

A compulsive page-turner ... a triumph of brilliant storytelling ... an instant classic that is an awesome, remarkable and exuberant achievement -- Simon Sebag Montefiore * Evening Standard *
Radically alters our assumptions about how Napoleon was beaten -- Andrew Roberts * Daily Telegraph, Books of the Year *
(He creates) an historic canvas that is both overwhelming and meticulous ... he inevitably touches the nerve points of modern power politics. * The Economist *
A compulsive read. This master storyteller and scholar has written an instant classic that is awesome, remarkable and exuberant. -- Simon Sebag Montefiore * The Scotsman *
An essential reference ... the Princess would have approved. * The Spectator *
(An) erudite, monumental piece of historial research ... it's a great tale with a clear argument, baked by an impressive array of sources and detail. -- Charles Clover * Financial Times *
A superbly crafted book -- Alexander M. Martin * TLS *
A lucid and detailed account -- Geoffrey Hosking * London Review of Books *

Dominic Lieven is a Senior Research Fellow of Trinity College, Cambridge University, and a Fellow of the British Academy. His book Russia Against Napoleon (Penguin) won the Wolfson Prize for History and the Prize of the Fondation Napoleon for the best foreign work on the Napoleonic era.