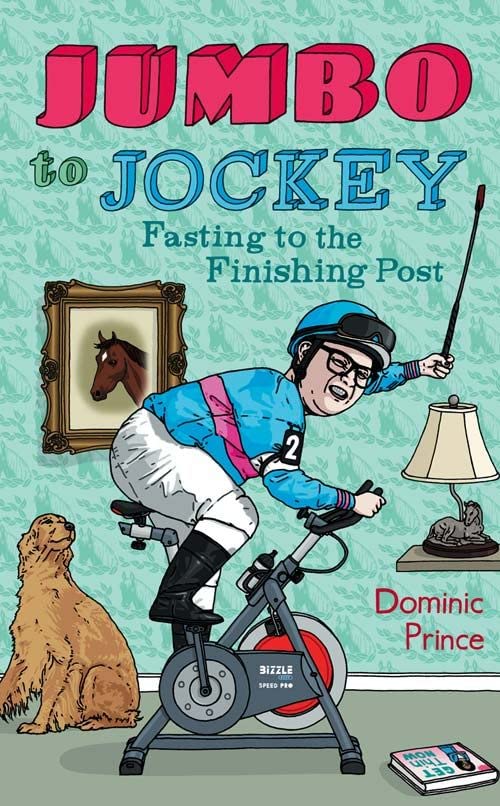 Jumbo to Jockey
by Dominic Prince

One midlife crisis, a horse and the diet of a lifetime

Jumbo to Jockey: Fasting to the Finishing Post by Dominic Prince

One midlife crisis, a horse and the diet of a lifetime

Dominic Prince, journalist, documentary-maker, racing enthusiast and bon viveur hit the scales at nearly 16 stone on his 47th birthday. It was not always so. His first love was and still is horses. As a child he would bunk off school to ride his first horse, Conker, and it was only after an horrific accident that left him and his horse wound up in barbed wire that he stepped down off his mount and gave in to the lure of Fleet Street and the three hour lunch.
But the smell of oats and the mist of early morning canters were never far away, even if he was living it from the other side of the paddock. In the 20 years since he last rode a horse he has made a film on Lester Piggott, bought and sold one race horse and won and lost thousands on 'the occasional flutter'. Through the drastic changes to his overindulgent lifestyle that he has had to go through to make the weight for the 4pm at Wincanton in October, is weaved an insider's account of the very particular world of jockeys, racing and the multi-billionaire owners who pull the strings at the world's greatest race courses.
Memoir, sports book, expose of the dark world of horse racing, at heart Jumbo to Jockey is the story that all middle aged men will know well of the realisation of a childhood dream before it is too late.

`What a thoroughly admirable achievement. Prince writes well about food but also about the enjoyment he finds on the back of a horse, cantering up the gallops in the early mornings.
The Racing Post

`With a natural storyteller's lightness of touch and gently self-deprecating humour, Jumbo to Jockey displays considerable spirit and draws the reader deep into the world of racing. Sheer joy leaping from the page.'
The Economist

`There is a quiet artistry here you don't often see in journalistic memoirs. The build up to the actual race is genuinely gripping. It all makes for a fascinating, gripping read, as the fat man reconnects with the thin man he had been unconsciously been harbouring for all those years.'
The Daily Mail

`As an account of a midlife crisis pursued to a triumphant conclusion, this is a delightful and unexpectedly touching memoir.'
Jane Shilling, Daily Telegraph

Dominic Prince is a free-lance journalist and documentary maker who writes for the Telegraph, Sunday Times, Mail, Tatler and Private Eye and has made award-winning films on Lester Piggott and the last Waterloo Cup. He is married to the food writer, Rose Prince and lives in London, currently on a diet of lentil broth and oatmeal.

GOR002652781
Jumbo to Jockey: Fasting to the Finishing Post by Dominic Prince
Dominic Prince
Used - Very Good
Paperback
HarperCollins Publishers
2011-01-01
224
0007288670
9780007288670
N/A
Book picture is for illustrative purposes only, actual binding, cover or edition may vary.
This is a used book - there is no escaping the fact it has been read by someone else and it will show signs of wear and previous use. Overall we expect it to be in very good condition, but if you are not entirely satisfied please get in touch with us.