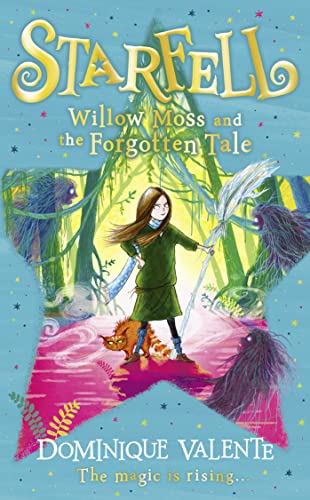 Starfell: Willow Moss and the Forgotten Tale
by Dominique Valente

Willow Moss, the youngest and least powerful sister in a family of witches, recently saved the world. The problem is, nobody can remember it - and, to make matters worse, her magical ability seems broken. Instead of finding lost things, objects keep disappearing against her will ... which is especially troubling now that her friend Sometimes needs her help!

Sometimes has discovered how to see ten minutes into the future. Unfortunately that's only enough time to find out that his kidnappers are on their way! His only hope is to write an urgent letter to Willow, asking if she wouldn't mind trying to find him.

As Willow and her friends piece together what has happened to Sometimes, their adventure takes them from an enchanted tower to the magical forest of Wisperia and into dangerous new realms... Can Willow save Sometimes when her own powers are out of control?

Praise for Starfell: Willow Moss and the Lost Day

'A wonderful book! Packed with fun, inventive magic, and loveable characters' - Michelle Harrison, author of A Pinch of Magic

'If you're looking for smart, charming, imaginative fantasy, look no further than Starfell. It's one of those books that immediately makes you feel right at home.' - P. G. Bell, author of The Train to Impossible Places

'Such a lovely book - fast-paced, funny and charming' - Robin Stevens, author of Murder Most Unladylike

'A spellbinding debut set in an irresistible magical world.' - Fiona Noble, The Bookseller

'This is a rip-roaring debut, packed with dragons and trolls, family rivalries and bitter grudges but the lasting message is one of loyalty, hope and the value of being different. With entertaining line drawings by Sarah Warburton, this is a series to watch out for.' - Daily Mail

'This is glorious - wonderful. A book for everyone, especially those who don't believe they have a talent - who aren't anything special. This is not a book to be ignored.' - Sue Chambers, Waterstones

Born in South Africa, Dominique Valente now lives in the Suffolk countryside with her husband and their English Bulldog, Fudge. She writes bestselling women's fiction under her pseudonym, Lily Graham, and is a former journalist for publications like Business Day and Woman & Home.

NGR9780008308438
Starfell: Willow Moss and the Forgotten Tale (Starfell, Book 2) by Dominique Valente
Dominique Valente
Starfell
New
Hardback
HarperCollins Publishers
2020-04-02
304
0008308438
9780008308438
N/A
Book picture is for illustrative purposes only, actual binding, cover or edition may vary.
This is a new book - be the first to read this copy. With untouched pages and a perfect binding, your brand new copy is ready to be opened for the first time.