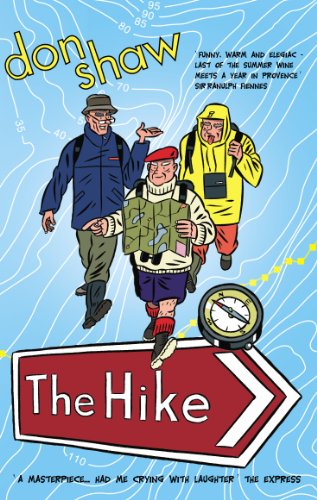 The Hike
by Don Shaw

In Stock
£3.99
Freddy, Phil and Don are three grumpy old men, travelling at various speeds in the slow lane of retirement, at a loss to understand the mad modern world around them. Phil likes to dash up hills trying to beat his personal best, while Freddy plots how to sabotage him - teasing him at leisure and asking deep and difficult questions.
Very Good
Only 2 left

The Hike by Don Shaw

Freddy, Phil and Don are three grumpy old men, travelling at various speeds in the slow lane of retirement, at a loss to understand the mad modern world around them. Their chosen method of escape from all this is a shared weekly hike in the Peak District, come gale, hail, snow or torrential rain. They pass the time bumping into colourful and eccentric locals, but their real passion is bickering among themselves. Not only about the right path to take, but also about where they're all going at the fag end of life. Phil likes to dash up hills trying to beat his personal best, while Freddy plots how to sabotage him - teasing him at leisure and asking deep and difficult questions. Stuck in the middle, Don's only ambition is to stop the squabbling getting out of hand long enough to find a nice pub for lunch. As warm as the wind is cold, as dry as the lashing rain is wet, The Hike is a hilarious tale of bum-warmers, crayfish-fanciers, East German Trabant enthusiasts, bodger philosophers, sticky ginger cake, gorgeous countryside and the subtle art of 'onedownmanship'.

"Funny, warm and elegiac - Last of the Summer Wine meets A Year in Provence" * Sir Ranulph Fiennes *
"A masterpiece ... had me crying with laughter" * Express *
"A minor classic ... You should buy this" * Sunday Times *

Don Shaw began writing full-time in 1968 and soon became one of Britain's top television writers, with credits including Z-Cars, Dangerfield and Van der Valk. His Wingate trilogy of plays and Bomber Harris both won BAFTAs. He has also written a number of film screenplays. Don has made many TV appearances, discussing a variety of topics ranging from the Carl Bridgewater murder, the IRA and the Falklands War to the 'Keep Brian Clough at Derby' campaign which he led in 1973. He is still a regular guest on BBC Radio Derby. As well as hiking, Don still finds time to run three miles a day, and his other great passion is flying his own Piper 22 aircraft. He is married with three children and lives in London and Derbyshire. You can see more about Don and contact him through his website at www.donshaw.uk.com

GOR000800255
The Hike by Don Shaw
Don Shaw
Used - Very Good
Paperback
Ebury Publishing
2006-04-06
256
0091908752
9780091908751
N/A
Book picture is for illustrative purposes only, actual binding, cover or edition may vary.
This is a used book - there is no escaping the fact it has been read by someone else and it will show signs of wear and previous use. Overall we expect it to be in very good condition, but if you are not entirely satisfied please get in touch with us.