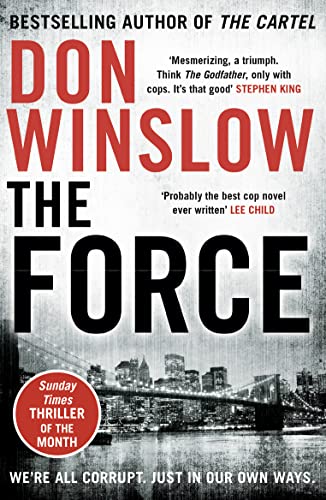 The Force
by Don Winslow

From the New York Times bestselling author of The Cartel - winner of the Ian Fleming Steel Dagger Award for Best Thriller of the Year - comes The Force, a cinematic epic as explosive, powerful, and unforgettable as The Wire.

The Force by Don Winslow

From the New York Times bestselling author of The Cartel - winner of the Ian Fleming Steel Dagger Award for Best Thriller of the Year - comes The Force, a cinematic epic as explosive, powerful, and unforgettable as The Wire.

Everyone can be bought. At the right price...

Detective Sergeant Denny Malone leads an elite unit to fight gangs, drugs and guns in New York. For eighteen years he's been on the front lines, doing whatever it takes to survive in a city built by ambition and corruption, where no one is clean.

What only a few know is that Denny Malone himself is dirty: he and his partners have stolen millions of dollars in drugs and cash. Now he's caught in a trap and being squeezed by the FBI. He must walk a thin line of betrayal, while the city teeters on the brink of a racial conflagration that could destroy them all.

Praise for The Force:

`This stands out by a mile ... fresher, faster, funnier and truer ... bursting with life, lousy with death, it is because it tells the truth, in all its ugliness, that this novel is so exhilarating' Daily Telegraph

`Hard-hitting ... one of the great works of fiction about the police ... superbly chronicled' The Times

`There won't be a better cop novel this year than The Force by Don Winslow. Not next year, or the year after that, either' Linwood Barclay

`Stephen King, James Ellroy and Lee Child see Don Winslow as one of their number, and he confirms his right to belong in this elite with The Force ... a panoramic picture of a criminal justice system permeated by corruption, cronyism and lies' Sunday Times, Thriller of the Month

`Sprawling and visceral' Financial Times, Crime Books of the Year

`Breathtaking. Think of TV series The Sopranos ... told in majestic prose ... this is without question among the finest ever police novels' Daily Mail, Books of the Year

`A brutal, gut-punching story' Independent, Books of the Year

`Shocking and shockingly convincing ... sinewy, flexible, raw and full of wit. This novel is as entertaining as the best crime fiction must be, but it is also moving' TLS

`Don Winslow's magnificent novels have positioned him as the next big-hitter of crime writing ... Gripping' Metro

`Mesmerizing, a triumph. Think The Godfather, only with cops. It's that good' Stephen King

`Nobody understands the disaster of corruption better than Don Winslow. The Force exposes the dawning horror of how it eats into the best intentions' Val McDermid, No.1 bestselling author of Out of Bounds

`A stunner of a cop novel with dialogue, gritty New York setting and moral pincers all in the service of a devastating plot' New York Times, Crime Books of the Year

Don Winslow is the author of nineteen acclaimed, award-winning, international bestsellers - including the No. 1 international bestseller The Cartel, winner of the Ian Fleming Steel Dagger Award, The Power of the Dog, Savages, and The Winter of Frankie Machine - several of which have been made into movies or are in development. A former investigator, anti-terrorist trainer, and trial consultant, Winslow lives in Southern California.

GOR009322824
The Force by Don Winslow
Don Winslow
Used - Like New
Paperback
HarperCollins Publishers
2018-03-08
496
0008227527
9780008227524
N/A
Book picture is for illustrative purposes only, actual binding, cover or edition may vary.
The book has been read, but looks new. The book cover has no visible wear, and the dust jacket is included if applicable. No missing or damaged pages, no tears, possible very minimal creasing, no underlining or highlighting of text, and no writing in the margins.