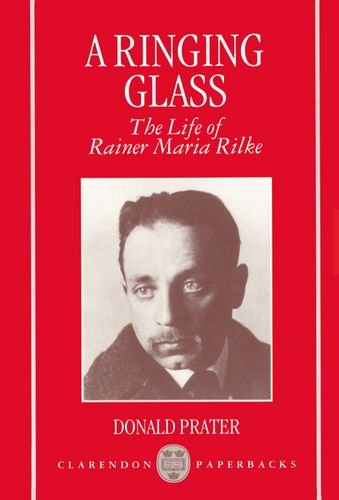 A Ringing Glass
by Donald A. Prater

In Stock
£14.99
This is a biography of Rainer Maria Rilke (1875-1926), the 20th-century lyric poet, whose works - "the New Poems", the "Duino Elegies", "the Sonnets to Orpheus", and in prose the "Cornet" and the "Malte Laurids Brigge", are of lasting importance to European literature.
Very Good
Only 1 left

A Ringing Glass: The Life of Rainer Maria Rilke by Donald A. Prater

This is a celebrated biography of Rainer Maria Rilke (1875-1926), prehaps the greatest lyric poet of this century. Rilke was born in Prague, but his nomadic existence led him through Germany, Russia, Spain, Italy, and France, until his death in Switzerland from leukaemia. Uniquely, he dedicated himself exclusively to his art while remaining receptive to the most varied influences of European culture. He visited Tolstoy at Yasnaya Polyana, acted for a time as secretary to Rodin, and was a friend o Romain Rolland, Leonid Pasternak, and Walter Rathenau. He was the protege of Princess Marie van Thurn und Taxis, and the lover of Lou Andreas-Salome and Baladine Klossowska. Yet he was single-minded in his search for the solitude he needed for his work, so much so that he seemed to many of his contemporaries to be a poet remote from the world. His poetic achievement - the New Poems, the Duino Elegies the Sonnets to Orpheus - and in prose the Cornet and the astonishing Malte Laurids Brigge, were works that made a lasting mark on European literature. Drawing on recent documentary evidence, A Ringing Glass is a compelling account of this most complex of lives, showing what manner of man lay behind the achievement of the work, and the part that work in turn played in Rilke's life.

`it is splendid and not a moment too soon to have a readable, civilized biography in English' Financial Times
`the most detailed, most fully documented and indeed the best biography we have (of Rilke)... in any language.' Observer
`a fine, dignified, and scholarly book ... a rarely balanced and substantial account.' Guardian

About Donald A. Prater

Dr Prater was Senior Lecturer in German at the University of Kent (1970-3) and then became a translator and minute-writer at CERN in Geneva, where he still lives

GOR004386948
A Ringing Glass: The Life of Rainer Maria Rilke by Donald A. Prater
Donald A. Prater
Clarendon Paperbacks
Used - Very Good
Hardback
Oxford University Press
1994-03-03
512
0198158912
9780198158912
N/A
Book picture is for illustrative purposes only, actual binding, cover or edition may vary.
This is a used book - there is no escaping the fact it has been read by someone else and it will show signs of wear and previous use. Overall we expect it to be in very good condition, but if you are not entirely satisfied please get in touch with us.