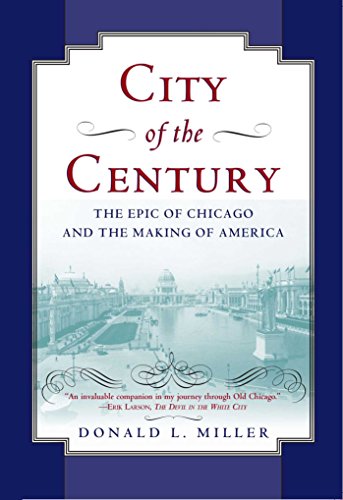 City of the Century
by Donald L. Miller

In Stock
£8.99
This history of Chicago describes its wild beginnings, the Great Fire of 1871, its architecture, its mix of cultures, its community of young writers and journalists, and its staggering projects - including the reversal of the Chicago river and the raising of the entire city from prairie mud.
Good
Only 2 left

City of the Century Summary

City of the Century: The Epic of Chicago and the Making of America by Donald L. Miller

The epic of Chicago is the story of the emergence of modern America. Here, witness Chicago's growth from a desolate fur-trading post in the 1830s to one of the world's most explosively alive cities by 1900.

Donald Miller's powerful narrative embraces it all: Chicago's wild beginnings, its reckless growth, its natural calamities (especially the Great Fire of 1871), its raucous politics, its empire-building businessmen, its world-transforming architecture, its rich mix of cultures, its community of young writers and journalists, and its staggering engineering projects-which included the reversal of the Chicago River and raising the entire city from prairie mud to save it from devastating cholera epidemics. The saga of Chicago's unresolved struggle between order and freedom, growth and control, capitalism and community, remains instructive for our time, as we seek ways to build and maintain cities that retain their humanity without losing their energy. City of the Century throbs with the pulse of the great city it brilliantly brings to life.

City of the Century Reviews

John Barron Chicago Sun-Times With City of the Century, Miller has written what will be judged as the great Chicago history.
David McCullough author of John Adams Brims with life, with people, surprise, and with stories -- and stories within stories -- all worth telling.
Morris Dickstein The Washington Post Sweeping and beautifully written.
Michiko Kakutani The New York Times A wonderfully readable account of Chicago's early history.

Donald L. Miller is the John Henry MacCracken Professor of History Emeritus at Lafayette College and author of ten books, including Vicksburg, and Masters of the Air, currently being made into a television series by Tom Hanks. He has hosted, coproduced, or served as historical consultant for more than thirty television documentaries and has written for The New York Times, The Washington Post, and other publications.

GOR003619825
City of the Century: The Epic of Chicago and the Making of America by Donald L. Miller
Donald L. Miller
Used - Good
Paperback
Simon & Schuster
1997-06-23
704
0684831384
9780684831381
Winner of Great Lakes Book Awards (General) 1997
Book picture is for illustrative purposes only, actual binding, cover or edition may vary.
This is a used book - there is no escaping the fact it has been read by someone else and it will show signs of wear and previous use. Overall we expect it to be in very good condition, but if you are not entirely satisfied please get in touch with us.