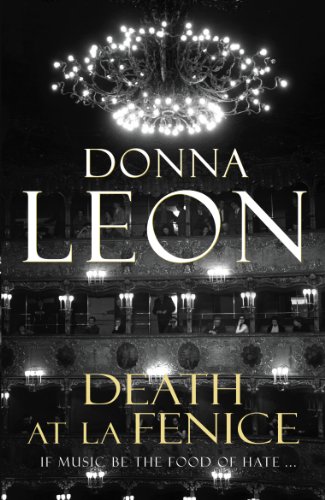 Used Price
£3.49
New RRP £8.99
Free Shipping in the UK
Even Commissario of Police, Guido Brunetti, used to the labyrinthine corruptions of the city, is shocked at the number of enemies Wellauer has made on his way to the top - but just how many have motive enough for murder?
Reviews:
Trustpilot
Like New Very Good Good Well Read

The twisted maze of Venice's canals has always been shrouded in mystery. Even the celebrated opera house, La Fenice, has seen its share of death ... but none so horrific and violent as that of world-famous conductor, Maestro Helmut Wellauer, who was poisoned during a performance of La Traviata. Even Commissario of Police, Guido Brunetti, used to the labyrinthine corruptions of the city, is shocked at the number of enemies Wellauer has made on his way to the top - but just how many have motive enough for murder? The beauty of Venice is crumbling. But evil is one thing that will never erode with age.

"Praise for Through A Glass, Darkly: Venetian life, and Brunetti's model marriage, are as entertaining as the working out of the whodunit. A joy from start to finish." * Evening Standard *
"'One of Venice's greatest contemporary chroniclers... The smells, flavours, sights and sounds all come flooding to life. Even though the first crime doesn't happen until well over halfway through, but this doesn't dampen its page-turning appeal... Once again, Leon has her finger on the pulse.'" -- Henry Sutton * Daily Mirror *
"Operatic brilliance... Donna Leon appears to have the knack of keeping her Venice-set Brunetti books as fresh as paint. Through A Glass, Darkly, like all her work, has the exuberance of a Puccini opera." * Independent *
"A wholly absorbing read." * Sunday Telegraph *
"Praise for Blood From A Stone: 'The fabulous Donna Leon' Antonia Fraser in the Spectator"

GOR009402159
Death at La Fenice: (Brunetti 1) by Donna Leon
Donna Leon
Brunetti
Used - Like New
Paperback
Cornerstone
2009-02-26
352
0099536560
9780099536567
N/A
Book picture is for illustrative purposes only, actual binding, cover or edition may vary.
This is a used book - there is no escaping the fact it has been read by someone else and it will show signs of wear and previous use. Overall we expect it to be in very good condition, but if you are not entirely satisfied please get in touch with us.