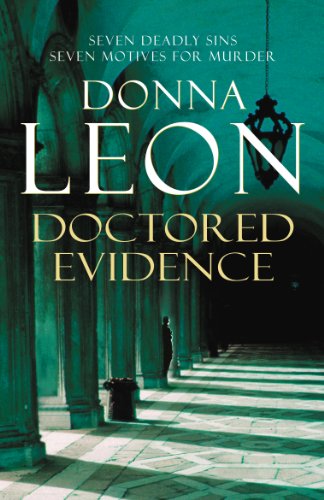 Used Price
£6.49
New RRP £8.99
Free Shipping in the UK
When a wealthy Venetian woman is found brutally murdered, the prime suspect is her Romanian maid, who has fled the city. As she attempts to leave the country, carrying a considerable sum of money and forged papers, the maid runs into the path of an oncoming train and is killed.
Reviews:
Trustpilot
Like New Very Good Good Well Read

When a wealthy Venetian woman is found brutally murdered, the prime suspect is her Romanian maid, who has fled the city. As she attempts to leave the country, carrying a considerable sum of money and forged papers, the maid runs into the path of an oncoming train and is killed. Case closed. But when the old woman's neighbour returns from abroad, it becomes clear that the maid could not have been the killer. Commissario Brunetti decides - unofficially - to take the case on himself. As Brunetti investigates, it becomes clear that the motive for the murder was unlikely to have been greed, rather that it had its roots in the temptations of lust. But perhaps Brunetti is thinking of the wrong deadly sin altogether...

"The virtues of Leon's writing are all on display in ... Doctored Evidence ... [Leon] has a wonderful feeling for the social complexities of Venice, where corruption is as old and deep and treacherous as the canals ... Like all the best detective fiction, Doctored Evidence not only solves a mystery, but also anatomises the setting in which the crime occurred" * Daily Mail *
"Leon's talent for sketching Venice with equal measures of affection and exasperation is undimmed, and Brunetti and his serious, thoughtful wife Paola remain subtle and pleasing creations" * Sunday Times *
"Fans of Leon will not be disappointed . . . She has crafted yet another expert mystery" * The Baltimore Sun *
"Deeply satisfying and often very funny" * The Miami Herald *
"A beautifully cadenced mystery . . . no one is more graceful and accomplished than Donna Leon" * The Washington Post *

GOR010563704
Doctored Evidence: (Brunetti 13) by Donna Leon
Donna Leon
Brunetti
Used - Like New
Paperback
Cornerstone
2009-02-26
336
0099536552
9780099536550
N/A
Book picture is for illustrative purposes only, actual binding, cover or edition may vary.
The book has been read, but looks new. The book cover has no visible wear, and the dust jacket is included if applicable. No missing or damaged pages, no tears, possible very minimal creasing, no underlining or highlighting of text, and no writing in the margins.