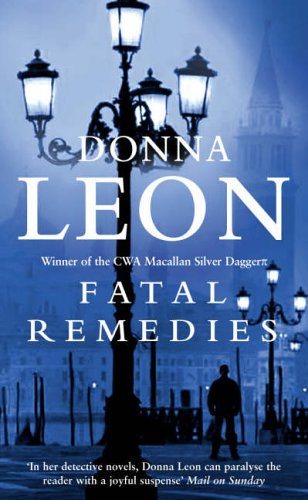 In Stock
£3.99
As his professional and personal lives clash, Brunetti's own career is under threat - and the conspiracy which Paola had risked everything to expose draws him inexorably to the brink ...
Very Good
6 in stock

A sudden act of vandalism had just been committed in the chill Venetian dawn. But Commissario Guido Brunetti soon finds out that the perpetrator is no petty criminal. For the culprit waiting to be apprehended at the scene of the crime is none other than Paola Brunetti, his wife. As Paola's actions provoke a crisis in the Brunetti household, Brunetti himself is under increasing pressure at work: a daring robbery with Mafia connections is linked to a suspicious death and his superiors need quick results. As his professional and personal lives clash, Brunetti's own career is under threat - and the conspiracy which Paola had risked everything to expose draws him inexorably to the brink ...

"Donna Leon has established Commissario Guido Brunetti as one of the most engaging of fictional detectives ... Brunetti is ... back on track, sadder perhaps, but wiser and wittier than ever" * Sunday Times *
"A splendid series ... with a backdrop of the city so vivid you can smell it" * Sunday Telegraph *
"One of the most exquisite and subtle detective series ever" * The Washington Post *
"No one knows the labyrinthine world of Venice . . . like Leon's Brunetti" * Time *
"[Brunetti's] humane police work is disarming, and his ambles through the city are a delight" * The New York Times Book Review *

GOR000348894
Fatal Remedies: (Brunetti 8) by Donna Leon
Donna Leon
Brunetti
Used - Very Good
Paperback
Cornerstone
2000-03-02
320
0099269309
9780099269304
N/A
Book picture is for illustrative purposes only, actual binding, cover or edition may vary.
This is a used book - there is no escaping the fact it has been read by someone else and it will show signs of wear and previous use. Overall we expect it to be in very good condition, but if you are not entirely satisfied please get in touch with us.