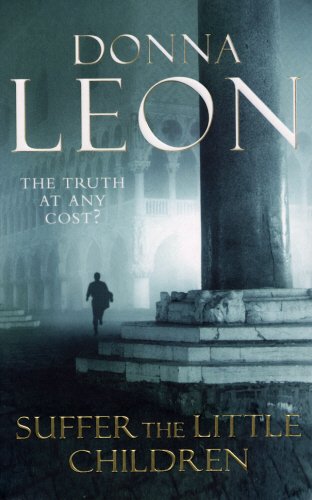 In Stock
£2.39
When Commissario Brunetti is summoned to the hospital bedside of a senior paediatrician whose skull has been brutally fractured, he is confronted with more questions than answers. Three men have burst into the doctor's apartment in the middle of the night, attacked him and took his 18-month-old son - but why?
Very Good Good
Only 3 left

When Commissario Brunetti is summoned to the hospital bedside of a senior paediatrician whose skull has been brutally fractured, he is confronted with more questions than answers. Three men have burst into the doctor's apartment in the middle of the night, attacked him and took his 18-month-old son - but why? As he investigates, Brunetti finds infertility, desperation, and babies for sale. Meanwhile, Inspector Vianello uncovers a scam between pharmacists and doctors in the city. And certain information about one's neighbours can lead to all kinds of corruption and all sorts of pain... Donna Leon's new novel is as subtle and gripping as ever, set in a beautifully realised Venice, seething with small-town malice

"Donna Leon is keeping up an astonishingly high standard. In Suffer the Little Children she achieves a perfect blend of characters, place, mystery and social issues ... Leon handles a sensitive, emotional subject with compassion ... she portrays Venice as a living, flawed city, not a smug tourist trap. Her 16th Brunetti novel is also one of her best" * The Times *
"Leon tackles this difficult issue sensitively, without stinting on mouth-watering descriptions of Venice" * Telegraph *
"Leon started out with offhand, elegant excellence, and has simply kept it up" * The Guardian *
"Summarizing Leon's plot, like telling the story of an opera, cannot do justice to the subtlety, drama and narrative skill that keep us turning the pages, wondering until the end how she will manage to tie up so many loose ends ... [and] Leon's fans who use Brunetti as an insider's guide to Venice will not be disappointed" * TLS *
"Leon's sixteenth Commissario Brunetti mystery is brilliant; she has never become perfunctory, never failed to give us vivid portraits of people and of Venice, never lost her fine, disillusioned indignation" -- Ursula K. Le Guin * The New York Times *

GOR001145949
Suffer the Little Children: (Brunetti 16) by Donna Leon
Donna Leon
Brunetti
Used - Very Good
Paperback
Cornerstone
2008-03-06
352
0099503220
9780099503224
N/A
Book picture is for illustrative purposes only, actual binding, cover or edition may vary.
This is a used book - there is no escaping the fact it has been read by someone else and it will show signs of wear and previous use. Overall we expect it to be in very good condition, but if you are not entirely satisfied please get in touch with us.