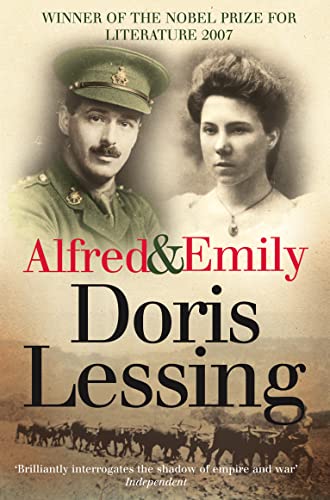 Alfred and Emily
by Doris Lessing

Doris Lessing's first book after winning the Nobel Prize for Literature revisits her childhood in Southern Africa and the lives, both fictional and factual, that her parents led.

Alfred and Emily by Doris Lessing

Doris Lessing's first book after winning the Nobel Prize for Literature revisits her childhood in Southern Africa and the lives, both fictional and factual, that her parents led.

`I think my father''s rage at the trenches took me over, when I was very young, and has never left me. Do children feel their parents' emotions? Yes, we do, and it is a legacy I could have done without. What is the use of it? It is as if that old war is in my own memory, my own consciousness.'

In this extraordinary book, Doris Lessing explores the lives of her parents, both of them irrevocably damaged by the Great War. Her father wanted the simple life of an English farmer, but shrapnel almost killed him in the trenches, and thereafter he had to wear a wooden leg. Her mother Emily's great love was a doctor who drowned in the Channel, and she spent the war nursing the wounded in the Royal Free Hospital.

In the first half of this book, Lessing imagines the lives her parents might have made for themselves had there been no war, a story that has them meeting at a village cricket match as children but leading separate lives. This is followed by a piercing examination of their lives as they actually came to be in the shadow of that war, their move to Rhodesia, a damaged couple hulking over Lessing's childhood in a strange land.

`Here I still am,' says Doris Lessing, `trying to get out from under that monstrous legacy, trying to get free.'

'Writers approaching 90 aren't supposed to write with vigour or experiment with form. But Lessing has never done the expected thing and "Alfred and Emily" is one more exception in an exceptional career.' Blake Morrison, Guardian

`This tale has a quality at once dreamy and wooden, like beautifully carved wooden dolls. Vividly and urgently written, [it] makes us think about the moral and emotional power of different ways of telling a story.' Financial Times

'Powerful...it is fascinating to see [Lessing] focus so sharply in her new book on what must be for us all, the most intimate of personal narratives: our parents' lives, what they were, or might have been.' The Times

`Lessing excels in the portrait of unsatisfactory lives, and together the parts form a poignant experiment.' Daily Telegraph

'It has the freshness, clarity and emotional acuity that made her first novel "The Grass is Singing" so outstanding. A tribute to a remarkable childhood, and a poignant memoir of the mother whose greatest legacy to her daughter was an invaluable gift for storytelling.' Literary Review

GOR001209958
Alfred and Emily by Doris Lessing
Doris Lessing
Used - Very Good
Paperback
HarperCollins Publishers
2009-03-05
288
0007240171
9780007240173
N/A
Book picture is for illustrative purposes only, actual binding, cover or edition may vary.
This is a used book - there is no escaping the fact it has been read by someone else and it will show signs of wear and previous use. Overall we expect it to be in very good condition, but if you are not entirely satisfied please get in touch with us.