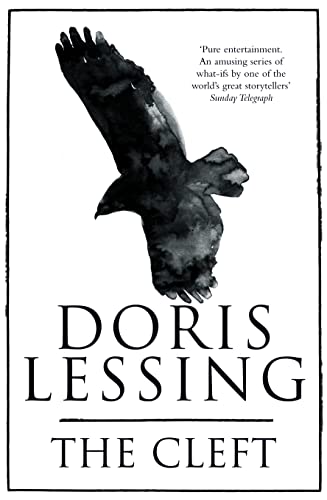 The Cleft
by Doris Lessing

The Cleft by Doris Lessing

An old Roman senator embarks on what may be his last endeavour: the retelling of the story of human creation. He recounts the history of the Clefts, an ancient community of women living in an Edenic, coastal wilderness, in the valley of an overshadowing mountain. The Clefts have no need, or knowledge, of men - childbirth is controlled through the cycles of the moon, and their children are always female. But with the birth of a strange, new child - a boy - the harmony of their community is thrown into jeopardy.

At first, the Clefts are awestruck by this seemingly malformed child, but as more and more of these threateningly unfamiliar males appear, they are rejected, and are exposed on the nearby mountainside, sacrificed to the patrolling eagles overhead. Unbeknownst to the Clefts, however, these baby males survive, aided by the eagles, and thrive on the other side of the mountain. It is not until a curious young Cleft named Maire goes beyond the geographical, and emotional, divide of the mountain that this disquieting fact is uncovered - forcing the Clefts to accept the prospect of a now shared world, and the possible vengeance of the wronged males.

In this fascinating and beguiling novel, Lessing confronts head-on the themes that inspired much of her early writing: how men and women, two similar and yet thoroughly distinct creatures, manage to live side by side in the world, and how the specifics of gender affect every aspect of our existence.

`Lessing skilfully manipulates multiple perspectives...a bold, inventive and challenging book from a writer who continues to enlighten and astonish as she approaches her tenth decade.' Independent

'A work of elegance, wit, humour and mystery. It may even be considered, one day, as one of her finest works...This is a deeply serious novel, but it's also humane, warm and witty...Doris Lessing, in her ninth decade, is writing fiction that is as hypnotic, perceptive and original as any wunderkind a quarter her age' Glasgow Herald

`The author's reach continues to thrill...there's witchery in the Old She yet.' Daily Telegraph

`A narrative with the compelling stamp of Lessing's late tales.' The Times

`Doris Lessing writes movingly of the human desire for change...she conveys a powerful belief in the impermanence of any situation in which human beings find themselves and the paradoxically unchanging nature of human relations.' Observer

`Lessing's engaging tale is told with the simplicity of an aural history committed to memory.' New Statesman

`Her prose is pleasingly incantatory...the novel has a pleasing gravitational pull on a purely poetic level.' Metro

`Lessing writes, as ever, with such calm and assured authority...a fascinating, at times disturbing book; one can't imagine any other writer bringing it off.' The Scotsman

'Lessing has always observed human behaviour with the dispassionate eye of a Martian naturalist...Her prose thrives on a bigness which comes from her imaginative origins on the Veld of her African childhood, and her rangy plots take vast, fast strides over the horizon, collapsing lifetimes like pocket telescopes ..."The Cleft" is a return to...the Tempest-like condensation of themes that has always enlarged her work' Times Literary Supplement

GOR000564661
The Cleft by Doris Lessing
Doris Lessing
Used - Very Good
Paperback
HarperCollins Publishers
2008-01-07
288
0007233442
9780007233441
Short-listed for British Book Awards: Reader's Digest Author of the Year Award 2008
Book picture is for illustrative purposes only, actual binding, cover or edition may vary.
This is a used book - there is no escaping the fact it has been read by someone else and it will show signs of wear and previous use. Overall we expect it to be in very good condition, but if you are not entirely satisfied please get in touch with us.