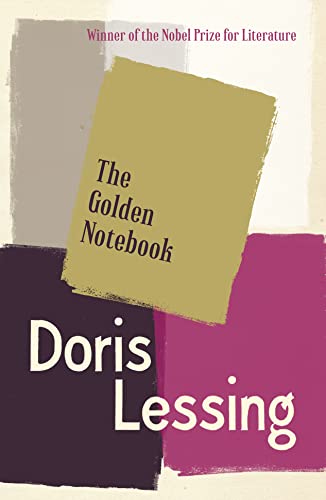 The Golden Notebook
by Doris Lessing

The landmark novel of the Sixties - a powerful account of a woman searching for her personal, political and professional identity while facing rejection and betrayal.

The Golden Notebook by Doris Lessing

The landmark novel of the Sixties - a powerful account of a woman searching for her personal, political and professional identity while facing rejection and betrayal.

In 1950s London, novelist Anna Wulf struggles with writer's block. Divorced with a young child, and fearful of going mad, Anna records her experiences in four coloured notebooks: black for her writing life, red for political views, yellow for emotions, blue for everyday events. But it is a fifth notebook - the golden notebook - that finally pulls these wayward strands of her life together.

Widely regarded as Doris Lessing's masterpiece and one of the greatest novels of the twentieth century, 'The Golden Notebook' is wry and perceptive, bold and indispensable.

'This ambitious novel has no equal.' Guardian

'At the beginning of the Sixties, this vast, frank, complicated novel helped to sustain our reputation for courageous, ambitious, experimental writing. Soon a worldwide bestseller, it is still Lessing's finest work. "The Golden Notebook" captured the heady mix of the early Sixties, when not just novels but political certainties were dissolving. The rising feminist movement seized it as a Bible.' Mail on Sunday

'Her greatest work...Shows the power of the female imagination at full throttle. It doesn't bear a simple political message but it does rip off the masks that women were accustomed to wearing, and it shows up the dangers and difficulties that women encounter if they try to live a free life in a man's world...A landmark novel, a book that both changed and explained a generation...One of the finest writers of the century.' Independent

'Doris Lessing is a pioneer of feminist self-consciousness in its raw state...The truths contained in "The Golden Notebook" are indeed harsh. It can also be said that these particular truths have not been examined in so rigorous and exemplary a fashion since the first appearance of this extraordinary book. A seminal work.' Anita Brookner, LRB

'"The Golden Notebook" is the diary of a writer in shock, a young woman determined to forge a life as a "free woman", as an "intellectual". Doris Lessing is a writer of considerable power, someone who can close her eyes and "give" a situation by the sheer force of her emotional energy.' Joan Didion, New York Times

Doris Lessing, winner of the Nobel Prize for Literature 2007, is one of the most celebrated and distinguished writers of recent decades. A Companion of Honour and a Companion of Literature, she has been awarded the David Cohen Memorial Prize for British Literature, Spain's Prince of Asturias Prize, the International Catalunya Award and the S. T. Dupont Golden PEN Award for a Lifetime's Distinguished Service to Literature, as well as a host of other international awards. Doris Lessing died on 17 November 2013.

GOR004733265
The Golden Notebook by Doris Lessing
Doris Lessing
Used - Very Good
Paperback
HarperCollins Publishers
2013-01-17
576
0007498772
9780007498772
N/A
Book picture is for illustrative purposes only, actual binding, cover or edition may vary.
This is a used book - there is no escaping the fact it has been read by someone else and it will show signs of wear and previous use. Overall we expect it to be in very good condition, but if you are not entirely satisfied please get in touch with us.