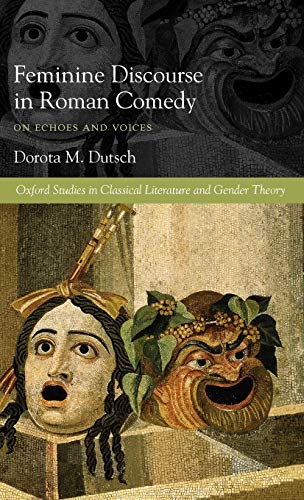 In Stock
£57.99
Dorota M. Dutsch examines the linguistic features of the lines that the Roman playwrights Plautus and Terence attribute to their female characters, and asks whether their construction of a feminine idiom should be considered as evidence of how Roman women actually spoke.
Very Good Good
Only 1 left

Feminine Discourse in Roman Comedy: On Echoes and Voices by Dorota Dutsch

As literature written in Latin has almost no female authors, we are dependent on male writers for some understanding of the way women would have spoken. Plautus (3rd to 2nd century BCE) and Terence (2nd century BCE) consistently write particular linguistic features into the lines spoken by their female characters: endearments, soft speech, and incoherent focus on numerous small problems. Dorota M. Dutsch describes the construction of this feminine idiom and asks whether it should be considered as evidence of how Roman women actually spoke.

Dutsch's book provides an insightful and groudbreaking examination * Bryn Mawr Classical Review *
[Dutsch's] book makes a significant contribution, not just to our understanding of Roman comedy, but to the vexed and difficult question of what, and how, women meant in the ancient Roman world. * Kristina Milnor, Journal of Roman Studies *

Dorota M. Dutsch is Assistant Professor in the Department of Classics, University of California, Santa Barbara.

GOR010196197
Feminine Discourse in Roman Comedy: On Echoes and Voices by Dorota Dutsch
Dorota Dutsch
Oxford Studies in Classical Literature and Gender Theory
Used - Very Good
Hardback
Oxford University Press
2008-08-21
304
0199533385
9780199533381
N/A
Book picture is for illustrative purposes only, actual binding, cover or edition may vary.
This is a used book - there is no escaping the fact it has been read by someone else and it will show signs of wear and previous use. Overall we expect it to be in very good condition, but if you are not entirely satisfied please get in touch with us.