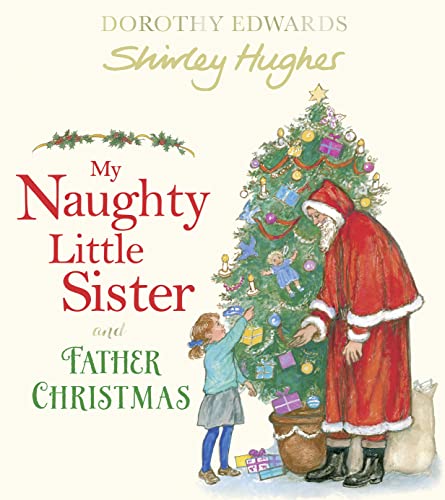 My Naughty Little Sister and Father Christmas
by Dorothy Edwards

My Naughty Little Sister and Father Christmas by Dorothy Edwards

Dorothy Edwards and Shirley Hughes' classic Christmas story about one naughty but entertaining little sister, for the first time ever as a 32 page picture book.

My naughty little sister always get excited about Christmas. She loves the trees and the lights but there's just one problem ... She doesn't like Father Christmas at all!

So when Father Christmas visits the school to give all the boys and girls some presents, little sister is up to her old tricks being naughtier than ever!

My Naughty Little Sister has charmed generations of adults and children alike thanks to Dorothy Edwards' playful stories and Shirley Hughes' beautiful illustrations. The enduring appeal of their relatable characters has resonated with families for years and years and this gorgeous new picture book edition will introduce the story to a whole new generation.

Praise for My Naughty Little Sister:

'Edwards was one of the best children's writers of the 20th century and her collaboration with illustrator Shirley Hughes was pure magic: the stories are cheeky, touching and funny' - The Sunday Express

'Naughtiness is naughtiness, whatever the generation, these stories delight' - The Scotsman

Dorothy Edwards (1914-1982) based My Naughty Little Sister on her younger sister, Phyllis, and went on to write five books about her with wide acclaim. Dorothy became a household name and her stories were read and loved across the globe. She became a fixture of a radio show in the 1950s called Read with Mother and she also wrote for Playschool and Jackanory.

Shirley Hughes was born in 1927. She has written and illustrated over 70 books, selling more than 11 million copies. In both 1977 and 2004 she won the Kate Greenaway Medal, and the Eleanor Farjeon Award in 1984. In 1999 she was awarded an OBE for services to children's literature and in 2000 was made a Fellow of the Royal Society of Literature.

NGR9781405294201
My Naughty Little Sister and Father Christmas by Dorothy Edwards
Dorothy Edwards
New
Paperback
Egmont UK Ltd
2019-10-03
32
1405294205
9781405294201
N/A
Book picture is for illustrative purposes only, actual binding, cover or edition may vary.
This is a new book - be the first to read this copy. With untouched pages and a perfect binding, your brand new copy is ready to be opened for the first time.