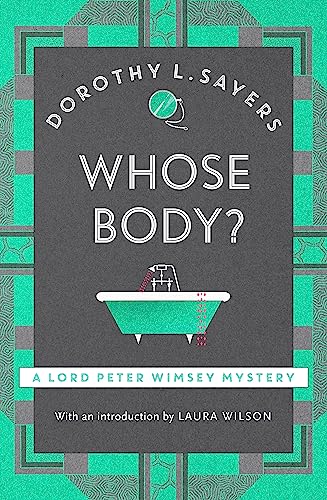 Whose Body?
by Dorothy L Sayers

Whose Body?: The classic detective fiction series to rediscover in 2020 by Dorothy L Sayers

'D. L. Sayers is one of the best detective story writers' Daily Telegraph

It was the body of a tall stout man. On his dead face, a handsome pair of gold pince-nez mocked death with grotesque elegance.

The body wore nothing else.

Lord Peter Wimsey knew immediately what the corpse was supposed to be. His problem was to find out whose body had found its way into Mr Alfred Thipps' Battersea bathroom.

She combined literary prose with powerful suspense, and it takes a rare talent to achieve that. A truly great storyteller. -- Minette Walters
I admire her novels . . . she has great fertility of invention, ingenuity and a wonderful eye for detail. -- Ruth Rendell
Sayers is one of the best detective story writers. -- E. C. Bentley * Daily Telegraph *
She brought to the detective novel originality, intelligence, energy and wit. * P. D. James *

Dorothy L Sayers was born in Oxford in 1893, and was both a classical scholar and a graduate in modern languages. As well as her popular Lord Peter Wimsey series, she wrote several religious plays, but considered her translations of Dante's Divina Commedia to be her best work. She died in 1957.

GOR007877294
Whose Body?: The classic detective fiction series to rediscover in 2020 by Dorothy L Sayers
Dorothy L Sayers
Lord Peter Wimsey Mysteries
Used - Very Good
Paperback
Hodder & Stoughton
1963-01-01
224
1473621259
9781473621251
N/A
Book picture is for illustrative purposes only, actual binding, cover or edition may vary.
This is a used book - there is no escaping the fact it has been read by someone else and it will show signs of wear and previous use. Overall we expect it to be in very good condition, but if you are not entirely satisfied please get in touch with us.