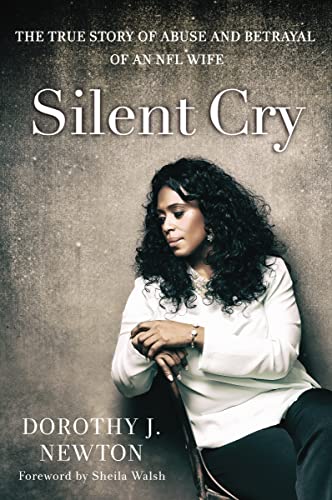 In Stock
£13.99
Dorothy Newton was married to Dallas Cowboy football star Nate Newton, who abused and threatened her until Dorothy found refuge through a relationship with Christ. Silent Cry is a testament to Dorothy's strength, will to live, and the peace that comes with hope in the God who sees and hears your tears---even when no one else does.
Very Good
Only 1 left

Silent Cry: The True Story of Abuse and Betrayal of an NFL Wife by Dorothy Newton

Raised near New Orleans as one of six children, Dorothy Newton was surrounded by abuse and poverty as she grew up. But she became the first in her family to graduate from college and moved out of poverty. She then began to live out her dreams in Dallas of a better home and life when she married celebrity superstar football player Nate Newton. She had gone from poverty to the pinnacle of success. She was married to a handsome, successful, famous professional athlete, who was a three time Super Bowl Champion and six time Pro-Bowler for the Dallas Cowboys.

But all that glittered was not gold.

Before long the relationship turned abusive. She found herself living in the world she thought she had escaped in her years growing up. The world did not see her suffering behind closed doors-she was betrayed, treated abusively, threatened continually. Dorothy was trapped with no one to talk to and nowhere to run. In this book Dorothy shares her experiences of pain, loss, survival, hope, recovery, and victory. A gripping story throughout, A Silent Cry is a testament to Dorothy's will to live and the peace that comes with hope in the God who sees and hears your tears-even when no one else does.

Here are the words I would use to describe my dear friend Dorothy Newton: courageous, strong, beautiful, and Christ-honoring. She bravely tells her story of abuse to encourage others that even in the midst of heartbreak and pain, God is faithful. You can survive brokenness, and the key is knowing the One who was broken and bruised for all mankind---Jesus. * Joni Lamb, vice president and cofounder of Daystar Television Network *
We applaud Dorothy for bearing her soul in this book. It is a moving and emotional account of a difficult journey and her unyielding devotion to God and family. * Kelvin and Lynn Martin, former wide receiver for the Dallas Cowboys *
We've been friends with Dorothy Newton for years and have long admired her strength and courage. She's a devoted mother who after her divorce brought that family together and held them so tightly that nothing could have ever torn them apart. It was incredibly touching and inspiring to watch. She is also one of the most spiritual people we've ever met, something she leaned on for strength during the trials of her marriage. She has a lifetime of wisdom to impart, and the simple, straightforward way she does so here makes every page an inspiration. It's a book filled with love, perseverance, and proof that in America, second acts aren't only for men; women have some pretty remarkable ones as well. * Emmitt Smith, NFL Hall of Famer & Pat Smith, founder/CEO of Treasure You *
It is a privilege to call Dorothy Newton friend. Her life is an inspiring example of a courageous woman of God who values faith, family, and friends as our ultimate early treasures. She shares her past and present experiences with others in the hope that they too can celebrate life in abundance now and forever. * Pat and Cheri Summerall, now-deceased legendary television sportscaster *
My friend Dorothy Newton will become your friend as she graciously takes you into her world---into the celebrity lifestyle and the shadowy recesses where abuse dominated and destroyed her dream world. She shares mistakes and victories. She contrasts the voice of abuse, which shouts fear and shame, with the sweet song of freedom and healing. In Silent Cry, you will be encouraged to not let your pain define you or your future. I have no doubt that getting to know Dorothy Newton will enrich and encourage you. * Debbie Morris, executive pastor, Pink (Gateway Women) at Gateway Church and author of The Blessed Woman *
Though the book's title reads Silent Cry, this is a story about triumph and grace---the triumph of Dorothy, of her sons Tre and King, and ultimately of Nate Newton as well. Both the good and the bad we read in this story occur beneath the covering of God's grace, which is the bedrock of Dorothy's strength. In fact, this book is more than a story; it is a witness and full evidence of human capability. Every man should read this biography. * Monte Ford, former senior vice president at American Airlines & Ingrid Ford, owner of Peace of Life Massage *
Powerful. Straightforward. Honest. Brave. These are words I use to describe Dorothy Newton. When I first met her, I knew immediately there was a spiritual strength about her that was uncommon. However, it wasn't until she dared to share the story of Silent Cry with me that I fully understood how her ability to overcome personal pain had been shaped by her passion for Jesus. Dorothy chose in the midst of isolation and relational deprivation to turn her tears into floods of victory. She shares the truth of her personal story in a way that reveals hope for anyone difficult circumstances, unhealthy relationships, or even devastating loss. It is rare to find such honesty and hope in the same place. If you've ever wondered how you are going to make it, this book is for you. * Jan Greenwood, pastor, Pink (Gateway women) at Gateway Church and author of Women at War *
Beauty, honesty, and guts describe this overcomer named Dorothy Newton. Because of Dorothy's courage to tell her story, all of us will better understand the horrible reality of domestic violence in our own backyard. We'll discover that all of us are responsible to learn about it, fight it, and give others a way out when they need it. Most of all, this true story will help victims know without a doubt that with God, they can escape domestic abuse and rise above it. * Lisa Rose, founder and board president of The Gatehouse, a ministry for women and children in crisis *
Truth brings liberty to the captive, gives beauty for ashes, great joy in place of grieving, and high praise to God instead of despair. Dorothy is a living testimony of this. She shares this story courageously so that the reader can experience God in their own set of circumstances. She found her tears and her freedom. Come, dear reader, and find yours too. * Rebecca Wilson, LCSW, LMFT, pastor, Marriage and Family Ministries at Gateway Church *

GOR009955397
Silent Cry: The True Story of Abuse and Betrayal of an NFL Wife by Dorothy Newton
Dorothy Newton
Used - Very Good
Paperback
Zondervan
2015-10-06
336
0310344840
9780310344841
N/A
Book picture is for illustrative purposes only, actual binding, cover or edition may vary.
This is a used book - there is no escaping the fact it has been read by someone else and it will show signs of wear and previous use. Overall we expect it to be in very good condition, but if you are not entirely satisfied please get in touch with us.