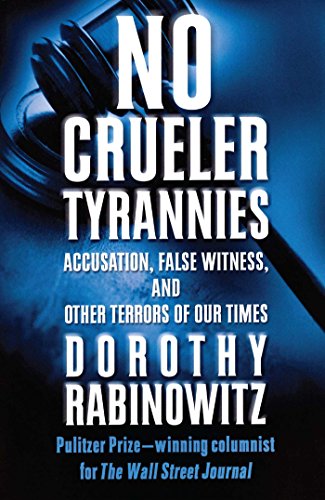 No Crueler Tyrannies
by Dorothy Rabinowitz

No Crueler Tyrannies: Accusation, False Witness, and Other Terrors of Our Times by Dorothy Rabinowitz

In No Crueler Tyrannies, Pulitzer Prize-winning journalist Dorothy Rabinowitz re-frames the facts, reconsiders the evidence, and demystifies the proceedings of some of America's most harrowing cases of failed justice. Recalling the hysteria that accompanied the child sex-abuse witch-hunts of the 1980s and 1990s, Rabinowitz's investigative study brings to life such alarming examples of prosecutorial terrors as the case against New Jersey nursery school worker Kelly Michaels, absurdly accused of 280 counts of sexual assault; the as-yet-unfinished story of Gerald Amirault's involvement in the Fells Acres scandal; Patrick Griffin, a respected physician whose life and reputation were destroyed by one false accusation of molestation; and Miami policeman Grant Snowden's sentencing of five consecutive life terms for a crime that, as proved in court eleven years later, he did not commit.
By turns a shocking expose, a much-needed postmortem, and a required-reading assignment for prosecutors and judges alike, No Crueler Tyrannies is ultimately an inspiring book about the courage of ordinary citizens who believe in the American judicial system enough to fight for due process.

The New York Times Book Review A powerful, prosecutorial book. Rabinowitz's accounts are superb muckraking, and they got results.
Nat Hentoff Village Voice No reporter is braver, more tenacious, and more effective than Dorothy Rabinowitz.
The Washington Post [Rabinowitz] has a stylish, gripping way of conveying her indignation about the fate of adults who have been falsely convicted of sex crimes.
The American Spectator An invaluable introduction to the nightmare world of ludicrous accusations, complicit judges, credulous media, and hysterical publics. Rabinowitz tells the story simply, sparely, and calmly.

GOR009962437
No Crueler Tyrannies: Accusation, False Witness, and Other Terrors of Our Times by Dorothy Rabinowitz
Dorothy Rabinowitz
Used - Very Good
Paperback
Simon & Schuster
2004-03-02
256
0743228405
9780743228404
N/A
Book picture is for illustrative purposes only, actual binding, cover or edition may vary.
This is a used book - there is no escaping the fact it has been read by someone else and it will show signs of wear and previous use. Overall we expect it to be in very good condition, but if you are not entirely satisfied please get in touch with us.