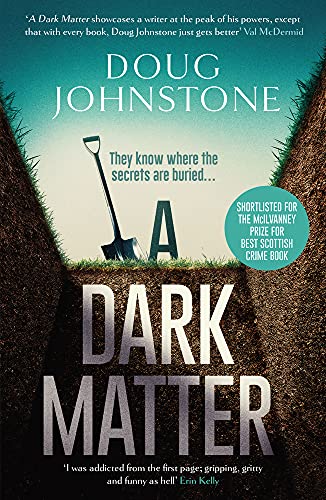 A Dark Matter
by Doug Johnstone

A Dark Matter by Doug Johnstone

Five days in the history of a small rural town, visited and infected by darkness, are recounted by Evil itself. A stunning high-concept thriller from the bestselling author of Good Samaritans and Nothing Important Happened Today.

'Cements Carver as one of the most exciting authors in Britain. After this, he'll have his own cult following' Daily Express

It's a small story. A small town with small lives that you would never have heard about if none of this had happened.

Little Henry Wallace was eight years old and one hundred miles from home before anyone talked to him. His mother placed him on a train with a label around his neck, asking for him to be kept safe for a week, kept away from Hinton Hollow.

Because something was coming.

Narrated by Evil itself, Hinton Hollow Death Trip recounts five days in the history of this small rural town, when darkness paid a visit and infected its residents. A visit that made them act in unnatural ways. Prodding at their insecurities. Nudging at their secrets and desires. Coaxing out the malevolence suppressed within them. Showing their true selves.

Detective Sergeant Pace had returned to his childhood home. To escape the things he had done in the city. To go back to something simple. But he was not alone. Evil had a plan.

Praise for Will Carver

'Arguably the most original crime novel published this year' Independent

'At once fantastical and appallingly plausible ... this mesmeric novel paints a thought-provoking if depressing picture of modern life' Guardian

'This book is most memorable for its unrepentant darkness...' Telegraph

'Unlike anything else you'll read this year' Heat

'Dark, engrossing, impossible to put down. By turns a crime thriller, a family saga, and a page-turner, this book has everything!' -- Luca Veste
'That rare book with heart and smarts to lift it above your average crime novel' -- Stuart Neville
'I can never get enough of Doug Johnstone's thoughtful, observant, soul-lifting writing' -- Louise Beech
'Piercing, wonderfully real and so very readable ... a breath of fresh air' * LoveReading *
'This is confident, assured characterisation that carries the story brilliantly well and keeps the reader utterly immersed in the interwoven story strands' * Live & Deadly *
'A Dark Matter is further proof that Doug Johnstone is as versatile a writer as they come ... there's rhythm and music in his words' * From Belgium with Booklove *
'A thriller that begs to be read in one sitting. Highly recommend' * The Book Review Cafe *
'Deliciously chilling, with a wry humour running throughout ... toxic, unsettling and just perfect' * Random Things through My Letterbox *

Doug Johnstone is an author, journalist and musician based in Edinburgh. He's had eight novels published, most recently Crash Land. His previous novel, The Jump, was a finalist for the McIlvanney Prize for Scottish Crime Novel of the Year. Several of his other novels have been award winners and bestsellers, and he's had short stories published in numerous anthologies and literary magazines. His work has been praised by the likes of Ian Rankin, Val McDermid and Irvine Welsh. Several of his novels have been optioned for film and television. Doug is also a Royal Literary Fund Consultant Fellow. He's worked as an RLF Fellow at Queen Margaret University, taught creative writing at Strathclyde University and William Purves Funeral Directors. He mentors and assesses manuscripts for The Literary Consultancy and regularly tutors at Moniack Mhor writing retreat. Doug has released seven albums in various bands, and is the drummer for the Fun Lovin' Crime Writers, a band of crime writers. He also reviews books for The Big Issue magazine, is player-manager for Scotland Writers Football Club and has a PhD in nuclear physics. Follow him on Twitter @doug_johnstone and visit his website: dougjohnstone.com

GOR010277150
A Dark Matter by Doug Johnstone
Doug Johnstone
Used - Very Good
Paperback
Orenda Books
2020-01-23
300
1912374986
9781912374984
N/A
Book picture is for illustrative purposes only, actual binding, cover or edition may vary.
This is a used book - there is no escaping the fact it has been read by someone else and it will show signs of wear and previous use. Overall we expect it to be in very good condition, but if you are not entirely satisfied please get in touch with us.