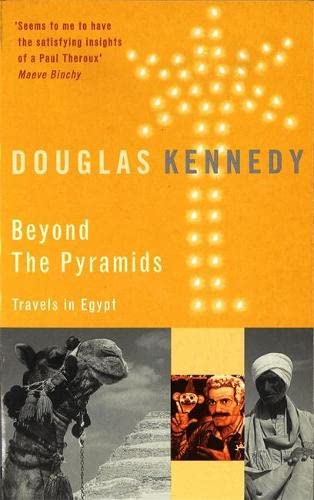 Beyond The Pyramids
by Douglas Kennedy

In Stock
£3.99
* Taps into the enduring fascination with all things Egyptian e.g. Rameses series.
Very Good
Only 4 left

Beyond The Pyramids Summary

Beyond The Pyramids: Travels in Egypt by Douglas Kennedy

BEYOND THE PYRAMIDS is a delightfully wry chronicle of travels through a country of incongruity - an Egypt encompassing a diversity of cultural influences which often belies its image of 'archaeological theme park'.

With an acute eye for the unusual, the interesting or the plain absurd, Douglas Kennedy takes us on a continually surprising tour beyond the pyramids, to a place where Bedouin watch American television in an oasis; where monks in the desert are computer-literate; and where an entire community of Cairo's poor have set up home in a cemetary.

Beyond The Pyramids Reviews

Kennedy writes with clarity and isn't scared of sticking the knife in, yet his criticisms are underlined with concern, not contempt * TIME OUT *
Douglas Kennedy takes on modern Egypt with a vigour uncommon in travel writing * THE TIMES *
He has a gift for sliding in and out of diverse communities and recording his impressions entertaingly ... This is the book of a born traveller * GUARDIAN *

Douglas Kennedy is the author of THE JOB, THE BIG PICTURE, THE DEAD HEART (now being filmed by the makers of PRISCILLA, QUEEN OF THE DESERT) and three travel books, BEYOND THE PYRAMIDS, IN GOD'S COUNTRY and CHASING MAMMON. Born in New York City in 1955, he lives in London with his wife and two children.

GOR001177385
Beyond The Pyramids: Travels in Egypt by Douglas Kennedy
Douglas Kennedy
Used - Very Good
Paperback
Little, Brown Book Group
1995-01-05
240
034910607X
9780349106076
N/A
Book picture is for illustrative purposes only, actual binding, cover or edition may vary.
This is a used book - there is no escaping the fact it has been read by someone else and it will show signs of wear and previous use. Overall we expect it to be in very good condition, but if you are not entirely satisfied please get in touch with us.