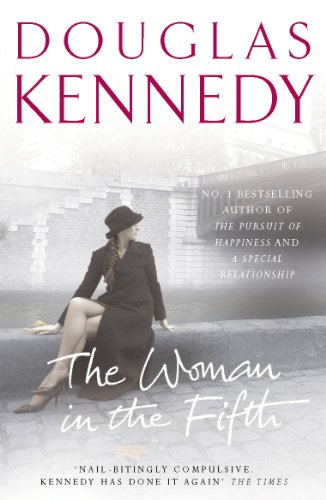 The Woman In The Fifth
by Douglas Kennedy

Harry Ricks is a man who has lost everything.

A romantic mistake at the small American college where he used to teach has cost him his job and his marriage.

The Woman In The Fifth Summary

The Woman In The Fifth by Douglas Kennedy

Harry Ricks is a man who has lost everything.

A romantic mistake at the small American college where he used to teach has cost him his job and his marriage. And when the ensuing scandal threatens to completely destroy him, he flees to Paris.

He arrives in the French captial in the bleak midwinter, and ends up having to work as a night guard to make ends meet. Then Margit, a beautiful, mysterious stranger, walks into his life. But their passionate and intense relationship triggers a string of inexplicable events, and soon Harry finds himself in a nightmare from which there is no easy escape.

The Woman In The Fifth Reviews

Nail-bitingly compulsive... A thumping good read. Kennedy has done it again * The Times *
An extraordinary tour de force * Mail on Sunday *
I ended up missing my stop to finish it * Daily Telegraph *
Classic Kennedy... extraordinarily compelling... Kennedy handles a morally complex, yet also surprisingly satisfying, ending with consummate skill, proving what a master he is * Daily Mirror *
A grim, claustrophobic atmosphere is layered with sleazy transactions and the emotional flaws of the characters. It's all neatly captured in Kennedy's sharp, shoot-from-the-hip prose * Independent on Sunday *

GOR000375090
The Woman In The Fifth by Douglas Kennedy
Douglas Kennedy
Used - Very Good
Paperback
Cornerstone
2008-05-29
432
0099469251
9780099469254
N/A
Book picture is for illustrative purposes only, actual binding, cover or edition may vary.
This is a used book - there is no escaping the fact it has been read by someone else and it will show signs of wear and previous use. Overall we expect it to be in very good condition, but if you are not entirely satisfied please get in touch with us.