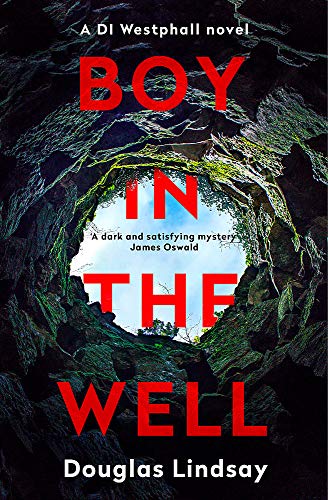 Boy in the Well
by Douglas Lindsay

Boy in the Well Summary

Boy in the Well: A Scottish murder mystery with a twist you won't see coming (DI Westphall 2) by Douglas Lindsay

A twisting new crime series set in the Scottish Highlands. For fans of Stephen King, Christopher Brookmyre and John Connolly.

'A dark and satisfying mystery . . . This one comes thoroughly recommended' James Oswald

The body of a young boy is discovered at the bottom of a well that has been sealed for two hundred years. Yet the corpse is only days old . . .

No one comes forward to identify #Boy9, and DI Ben Westphall's only suspects are the farmers on whose land the well sits. They certainly seem as though they have something to hide. But it might not be what he thinks.

Soon, similarities from an old crime emerge and Westphall must look to the past to piece together the dark and twisted events taking place in the present.

WHAT READERS ARE SAYING ABOUT BOY IN THE WELL

'Intricately and expertly plotted . . . What an ending! One which left me wholly satisfied'

'Westphall is a great character and a breathe of fresh air in this genre. A great series you will be pleased you've found.'

Customer Reviews - Boy in the Well

Boy in the Well Reviews

Praise for Douglas Lindsay and the DI Westphall series * - *

Boy in the Well is a dark and satisfying mystery. I thoroughly enjoyed my time in the company of DI Ben Westphall, a compelling personality. I look forward to his next instalment. This one comes thoroughly recommended

-- James Oswald on Boy in the Well
A Tartan Noir tour de force. Lindsay writes with an economy and skill all too rare in modern fiction . . . Brilliant -- Tony Black, author of the DI Bob Valentine series on Song of the Dead
Richly atmospheric . . . Lindsay solidifies his place as one of the rising stars of tartan noir * Publishers Weekly on Song of the Dead *
Lindsay blends the past and present with eerie, supernatural undertones, building a mysterious puzzle that you have to unravel * Culturefly on Boy in the Well *
Lindsay has crafted a chilling, well-paced thriller that spans a range of time periods with a case of deeply disturbing characters, all set against a dramatic Highlands backdrop. * Woman *

Douglas Lindsay was born in Scotland in 1964, at 2:38 am. Thirty-five years of little note ensued, before the world heralded the publication of his first book, The Long Midnight of Barney Thomson, which was adapted was adapted for the screen starring Robert Carlyle, Ray Winstone and Emma Thompson. As he was leaving the house to undertake a public engagement for the first time, his wife kissed him on the cheek and said, 'Whatever you do, don't be yourself...' Sadly, Lindsay continues to ignore her advice to this day.
Lindsay worked at the Ministry of Defence for over ten years and is married to a diplomat. He has lived in Dakar, Belgrade, Warsaw and Tallinn, an experience that inspired Song of the Dead. He now lives and writes full time in Somerset with his wife and their two children. Find him on Twitter at @DTSLindsay.

GOR009846168
Boy in the Well: A Scottish murder mystery with a twist you won't see coming (DI Westphall 2) by Douglas Lindsay
Douglas Lindsay
DI Westphall
Used - Like New
Paperback
Hodder & Stoughton
2019-05-30
384
1473696941
9781473696945
N/A
Book picture is for illustrative purposes only, actual binding, cover or edition may vary.
The book has been read, but looks new. The book cover has no visible wear, and the dust jacket is included if applicable. No missing or damaged pages, no tears, possible very minimal creasing, no underlining or highlighting of text, and no writing in the margins.