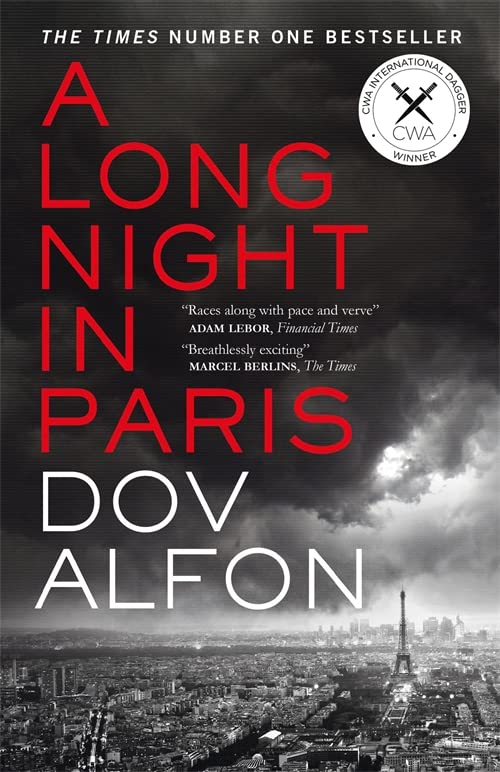 A Long Night in Paris by Dov Alfon

A Long Night in Paris: Winner of the Crime Writers' Association International Dagger by Dov Alfon

When an Israeli tech entrepreneur disappears from Charles de Gaulle airport with a woman in red, logic dictates youthful indiscretion. But Israel is on a state of high alert nonetheless. Colonel Zeev Abadi, the new head of Unit 8200's autonomous Special Section, who just happens to be in Paris, also just happens to have arrived on the same flight.

For Commissaire Leger of the Paris Police coincidences have their reasons, and most are suspect. When a second young Israeli is kidnapped soon after arriving on the same flight, this time at gunpoint from his hotel room, his suspicions are confirmed - and a diplomatic incident looms.

Back in Tel Aviv, Lieutenant Oriana Talmor, Abadi's deputy, is his only ally, applying her sharp wits to the race to identify the victims and the reasons behind their abduction. In Paris a covert Chinese commando team listens to the investigation unfurl and watches from the rooftops. While by the hour the morgue receives more bodies from the river and the city's arrondissements.

The clock has been set. And this could be a long night in the City of Lights.

A timely addition to the canon of international thrillers ... races along with pace and verve to a satisfying ending -- Adam LeBor * Financial Times *
This is deeply enjoyable espionage thriller with plenty of juicy details about modern spycraft, and although he is sometimes as sardonic and cynical as John Le Carre, Alfon's style is light and relaxed. He invests his heroes, Bond-esque spymaster Colonel Zeev Abadi and his beautiful, brilliant deputy Lt Oriana Talmor, with his own agreeable sense of humour . . . A spy novel with lead characters that are genuinely likeable. -- Jake Kerridge * Daily Telegraph. *
Some terrific action sequences in this fiendishly complicated yet pacey thriller. Readers who relish technical detail will appreciate the wealth of information about the Israeli intelligence services, cheek-by-jowl with political shenanigans, Chinese gangsters and mysterious blonds -- Laura Wilson * Guardian *
So self-possessed and jaw-clinchingly good . . . escapes the ghetto of genre fiction through some great writing. Highly recommended -- Greg Dixon * NZ Listener *
Rarely can so much action have been crammed into a story of espionage covering just one day . . . Dov Alfon, a former intelligence officer and the editor-in-chief of an Israeli newspaper, knows about secrets and how to tell stories . . . Breathlessly exciting. -- Marcel Berlins * The Times. *
A genuinely thrilling espionage novel . . . Chinese gangsters, French detectives, Russian models and charismatic, backstabbing Israeli spies, all locked into a brilliantly choreographed danse macabre. -- John Williams * Mail on Sunday. *
I can't remember any previous Israeli thriller so brilliant, lean and sleek . . . A novel for our post-truth times, totally believable and impossible to put down. -- Aharon Lapidot * Israel Hayom. *
Alfon takes over from John Le Carre and the old masters of the spy novel. -- Guy Horowitz * Haaretz. *
Alfon breaks the limits of previous generation thrillers and creates the 21st century spy novel, sleek, highly political, funny, romantic and unforgettable. -- Talma Admon * Maariv. *
Thriller of the year... I'm in love with this duo of intelligence officers, they'll never let me down. -- Galit Dahan-Carlibach * NRG. *
Best novel of the year... John Le-Carre and scores of Mossad agents can happily retire and leave room for Dov Alfon and his Unit 8200 wizards, who change the shape of espionage thrillers with enormous talent, depth and intensity. A masterpiece. -- Shay Golden * Makor Rishon. *
The best Israeli thriller ever written. -- Meira Barnea-Argaman * TV Channel 2. *
If you want to sleep during your flight, do *not* buy this thriller at the airport! The pages fly by themselves and prey on my thoughts long after I landed. -- Haim Hecht * Radio Kol-Rega. *
Dov Alfon has written a first-class thriller, utterly knowing, richly detailed and rigorously researched . . . A wonderful book, riveting and ingenious. I couldn't put it down till the final twist. -- Gal Perl * Al-Hakavenet. *
Best read... Alfon knows so much about the ways the Israeli intelligence corps work that it adds a lot to the enjoyment of the book... His characters are great, and the plot is full of suspense and very fast-paced. I'm looking forward to the next book in the series. -- Adi Shtamberger * Jerusalem Post. *
An amazing achievement... This thriller captures the zeitgeist with enormous power . . . Equal parts suspense and entertainment, you simply can't put it down. -- Ilan Lukatch * Radio Tel-Aviv. *
Fast action, clever plotting and a Bond-esque lead character who drives the narrative forward at every turn . . . This is high octane spy action with a genuinely fascinating ability to take us behind the scenes of a modern intelligence service. -- M.C. Scott
Dov Alfon, brought up in Paris and Tel Aviv, is a former intelligence officer of Unit 8200, the most secretive arm of the Israeli Defence Forces. He was editor in chief of Israel's most influential newspaper, Haaretz, and chief editor of the leading publishing house Kinneret-Zmora. A Long Night In Paris, published in Israel to rave reviews, topped the best seller charts for 24 weeks. His previous projects have been called "fantastically creative" by the Guardian, "revolutionary" by The Paris Review and "incredibly inspiring" by The New Yorker. This is his first work of fiction.
GOR011256369
9780857058805
0857058800
A Long Night in Paris: Winner of the Crime Writers' Association International Dagger by Dov Alfon
Dov Alfon
Used - Good
Paperback
Quercus Publishing
2019-01-08
432
N/A
Book picture is for illustrative purposes only, actual binding, cover or edition may vary.
This is a used book - there is no escaping the fact it has been read by someone else and it will show signs of wear and previous use. Overall we expect it to be in very good condition, but if you are not entirely satisfied please get in touch with us
Trustpilot