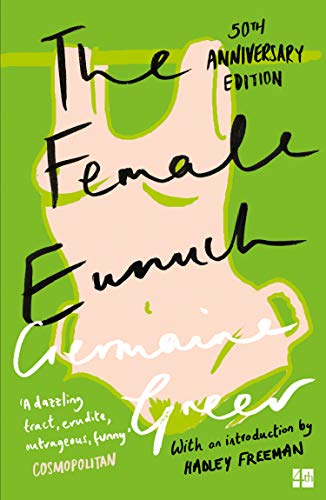 A worldwide bestseller, translated into over twelve languages, THE FEMALE EUNUCH is a landmark in the history of the women's movement. Drawing liberally from history, literature and popular culture, past and present, Germaine Greer's searing examination of women's oppression is at once an important social commentary and a passionately argued masterpiece of polemic.

Probably the most famous, most widely read book on feminism ever.

`A dazzling combination of erudition, eccentricity and eroticism.'
Newsweek

`Germaine Greer in THE FEMALE EUNUCH converted me to Women's Lib, as much by her bawdy sense of humour as by the bite of her polemic' Kenneth Tynan, Observer

Germaine Greer is a major cultural figure - a writer, an English critic, a literary and media star, and a feminist.

GOR001208383
The Female Eunuch (Harper Perennial Modern Classics) by Dr. Germaine Greer
Dr. Germaine Greer
Harper Perennial Modern Classics
Used - Very Good
Paperback
HarperCollins Publishers
2006-05-15
400
0007205015
9780007205011
N/A
Book picture is for illustrative purposes only, actual binding, cover or edition may vary.
This is a used book - there is no escaping the fact it has been read by someone else and it will show signs of wear and previous use. Overall we expect it to be in very good condition, but if you are not entirely satisfied please get in touch with us.