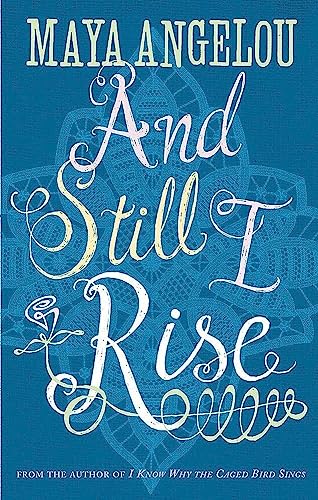 And Still I Rise
by Dr Maya Angelou

In Stock
£5.99
The re-issue of AND STILL I RISE, first published in 1986, from Maya Angelou - one of the most celebrated writers and poets of the world.
Very Good Good
6 in stock

And Still I Rise Summary

And Still I Rise by Dr Maya Angelou

Maya Angelou's poetry - lyrical and dramatic, exuberant and playful - speaks of love, longing, partings; of Saturday night partying, and the smells and sounds of Southern cities; of freedom and shattered dreams. 'The caged bird sings/ with a fearful trill/ of things unknown/ but longed for still/ and his tune is heard/ on the distant hill/ for the caged bird/ sings of freedom.' Of her poetry, KIRKUS REVIEWS has written, 'It is just as much a part of her biography as I KNOW WHY THE CAGED BIRD SINGS, GATHER TOGETHER in MY NAME, SINGIN' AND SWINGIN' AND GETTING MERRY LIKE CHRISTMAS, and HEART OF A WOMAN.

And Still I Rise Reviews

A brilliant writer, a fierce friend and a truly phenomenal woman -- President Barack Obama
The poems and stories she wrote . . . were gifts of wisdom and wit, courage and grace -- President Bill Clinton
She moved through the world with unshakeable calm, confidence and a fierce grace . . . She will always be the rainbow in my clouds -- Oprah Winfrey
She was important in so many ways. She launched African American women writing in the United States. She was generous to a fault. She had nineteen talents - used ten. And was a real original. There is no duplicate -- Toni Morrison

Dr Maya Angelou was one of the world's most important writers and activists. Born 4 April 1928, she lived and chronicled an extraordinary life: rising from poverty, violence and racism, she became a renowned author, poet, playwright, civil rights' activist - working with Malcolm X and Martin Luther King - and memoirist. She wrote and performed a poem, 'On the Pulse of Morning', for President Clinton on his inauguration; she was given the Presidential Medal of Freedom by President Obama and was honoured by more than seventy universities throughout the world.

She first thrilled the world with I Know Why the Caged Bird Sings (1969). This was followed by six volumes of autobiography, the seventh and final volume, Mom & Me & Mom, published in 2013. She wrote three collections of essays; many volumes of poetry, including His Day is Done, a tribute to Nelson Mandela; and two cookbooks. She had a lifetime appointment as Reynolds Professor of American Studies at Wake Forest University of North Carolina. Dr Angelou died on 28 May 2014.

GOR001258386
And Still I Rise by Dr Maya Angelou
Dr Maya Angelou
Used - Very Good
Paperback
Little, Brown Book Group
1986-05-08
112
0860687570
9780860687573
N/A
Book picture is for illustrative purposes only, actual binding, cover or edition may vary.
This is a used book - there is no escaping the fact it has been read by someone else and it will show signs of wear and previous use. Overall we expect it to be in very good condition, but if you are not entirely satisfied please get in touch with us.