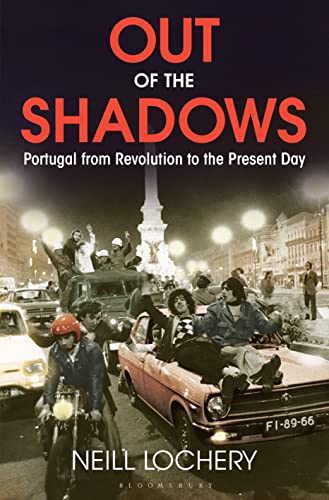 Out of the Shadows
by Dr. Neill Lochery

In Stock
£18.99
An incisive account of Portugal in the twentieth and twenty-first centuries by eminent historian Neill Lochery.
Very Good
Only 1 left

Out of the Shadows Summary

Out of the Shadows: Portugal from Revolution to the Present Day by Dr. Neill Lochery

'Lisbon and Portugal's best days are behind them' is a common theme put forward by writers who focus their attention on the golden era of Portuguese discoveries, the Empire and the role of Lisbon as a major Atlantic power. Neill Lochery's book demonstrates that Portugal is not suffering from such inevitable decline. Out of the Shadows is a full account of post-authoritarian democratic Portugal (1974 to Present) following the Carnation Revolution which began on April 25th 1974 and based on documentary sources, personal accounts and unpublished documents from the National Archive in Kew. In 1974 a dramatic overnight coup led to the fall of the 'Estado Novo' dictatorship in Portugal - in Lisbon the events became known as the Carnation Revolution. As the colonies collapsed, the United States helped airlift 13,000 refugees from Angola back to Portugal as US Secretary of State Henry Kissinger maneuvered to advance the moderate side of the government in Lisbon over the radicals and thus guarantee US interests. As Neill Lochery argues, one of the major misunderstandings of the post-revolution era in Portugal has been the concentration on domestic over international factors in helping to shape its story. Having emerged from its twentieth century financial crisis and bail out and thus 'out of the shadows', he argues that Portugal is a country of huge relevance to the present day and of great future significance to the European continent. Indeed, the strengthening of bonds between Portugal and its European neighbours can be seen to be more important than ever, given the heightened tensions in European politics, the refugee crisis and the prospect of a changing European Union.

Out of the Shadows Reviews

A landmark work ... it fills a glaring void in the literature and offers an approachable, fair-minded and at times even a whimsical introduction to the past four decades of Portuguese history. * Times Literary Supplement *
A useful introduction to an underappreciated corner of Europe, tracing the country's history from the fall of authoritarian rule in the so-called Carnation Revolution of 1974 to the present. * Foreign Affairs *
Affectionate ... the originality of Lochery's book lies in its sources * Literary Review *

Professor Neill Lochery is a world-renowned authority on the politics and modern history of Europe and the Middle East. He is the Catherine Lewis Professor of Mediterranean and Middle Eastern Studies at UCL and the author of a dozen books including: Lisbon: War in the Shadows of the City of Light 1939-45 (Perseus), Brazil:The Fortunes of War and the Making of Modern Brazil and The Resistible Rise of Benjamin Netanyahu.

GOR008591341
Out of the Shadows: Portugal from Revolution to the Present Day by Dr. Neill Lochery
Dr. Neill Lochery
Used - Very Good
Hardback
Bloomsbury Publishing PLC
2017-02-23
384
1472934202
9781472934208
N/A
Book picture is for illustrative purposes only, actual binding, cover or edition may vary.
This is a used book - there is no escaping the fact it has been read by someone else and it will show signs of wear and previous use. Overall we expect it to be in very good condition, but if you are not entirely satisfied please get in touch with us.