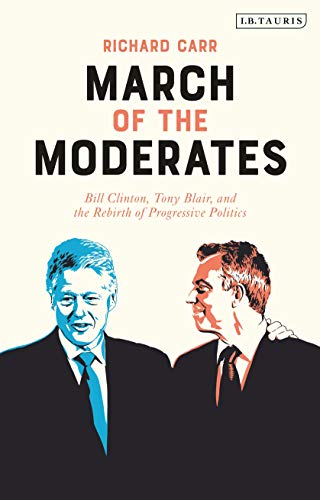 March of the Moderates
by Dr. Richard Carr

March of the Moderates Summary

March of the Moderates: Bill Clinton, Tony Blair, and the Rebirth of Progressive Politics by Dr. Richard Carr

Anglo-American relations, the so-called 'Special Relationship', reached a new era with the rise of New Labour and the New Democrats in the late-1980s and early-1990s. Richard Carr reveals the untold story of the transatlantic 'Third Way' by analysing how Tony Blair and Bill Clinton won power and ultimately how they lost it. Using newly unearthed archives and interviews with key players, he investigates the relationship between the administrations and sheds new light on big events such as the Good Friday Agreement in Northern Ireland, the handover to George W. Bush, and the controversial Iraq War.

March of the Moderates Reviews

March of the Moderates is grounded in a detailed analysis of the New Labour/New Democrats' legacy. It sheds new light on the relationship between Tony Blair and Bill Clinton, and unearths unpublished information on figures such as Joe Biden, Hillary Clinton and Neil Kinnock. As such it provides a valuable record of a slice of history. * Cambridge Independent *
Carr's story makes engaging history. * The Herald *
Engaging ... 7/10. * The Irish Times *
A convincing case is made for progressive pragmatism, as the academic Richard Carr traces how New Labour and the US Democratic Party found their way out of such political wilderness. * The i *
An engaging history. * Western Daily Press *
Timely ... An insightful guide to the benefits of the centre-left working together on both sides of the Atlantic. * Tides of History *
March of the Moderates is an authentic and clear-eyed analysis of Anglo-American politics in the eighties and nineties. Readers may not agree with all its conclusions, but its commentary should make all rethink their perspectives on this vital period. * Dick Gephardt, Democratic Minority/Majority Leader in the House of Representatives, 1989-2003, and Presidential Primary Candidate, 1988 and 2004 *
March of the Moderates is a clear, informed and informative account of the ways in which Bill Clinton's 'New Democrats' and Tony Blair's 'New Labour' were able to build successful political movements of the centre left. It has much to consider for British and American audiences alike - and offers insights into both the policies and the personalities. * Charles Clarke, former British Home Secretary and distinguished visiting fellow at the Price School of Public Policy, University of Southern California *
March of the Moderates is a well-researched, illuminating analysis of the realignment of progressive politics in the US and UK. Anyone looking to understand how Bill Clinton and the New Democrats and Tony Blair and New Labour regained their electorates' trust and, ultimately, managed to change their countries for the better would do well to read it. * Al From, founder of the Democratic Leadership Council and author of The New Democrats and the Return to Power *
An engrossing account of the journey to power for inspirational leaders on both sides of the Atlantic. It shows how they crafted a new future for their countries, charting both the successes and the failures. This readable book brings it home that vision and courage are needed to unlock opportunity for those who are so frequently overlooked. A timely reminder that progressive politics is about building opportunity for all, and that there is no crime in aspiration. * Baroness Helen Liddell, former Secretary of State for Scotland *
At a time when trust in politics and hope for a better future is ebbing away, this book shows it is worth a trip back to the 1990s to remind ourselves how the New Democrats and New Labour built up that trust, won five elections between them and then used that power to build a more optimistic and equal society. Of course, mistakes were made - and we should learn from them - but Blair and Clinton were the most successful centre-left leaders since FDR in the US and Attlee in the UK. * Rachel Reeves MP, Chair of the Business, Energy and Industrial Strategy Committee, and author of Women of Westminster *
The book is absolutely brilliant. It's not just for those who are into that sort of thing, but if you are into relatively recent British and American politics it's a fantastic read with some great interviews in it. * Matt Forde, The Political Party Podcast *

Richard Carr is a Senior Lecturer in History and Politics at Anglia Ruskin University. His 2017 biography of Charlie Chaplin was longlisted for a Kraszna-Krausz book prize. In 2019-20 he serves as a Theodore C. Sorensen Fellow at the John F. Kennedy Library, Boston, and a Bordin-Gillette Fellow at the Bentley Historical Library, University of Michigan.

1. Too Tied to Myth; Too Rooted in the Past 2. Acceptable in the Eighties 3. Harbingers of the Revolution 4. Office and Opposition 5. New Democrats, New America 6. Learning from the Best 7. Blair and Brown's Britain 8. The Third Way International 9. Intervention and Iraq

NGR9781788317344
March of the Moderates: Bill Clinton, Tony Blair, and the Rebirth of Progressive Politics by Dr. Richard Carr
Dr. Richard Carr
New
Hardback
Bloomsbury Publishing PLC
2019-09-05
336
1788317343
9781788317344
N/A
Book picture is for illustrative purposes only, actual binding, cover or edition may vary.
This is a new book - be the first to read this copy. With untouched pages and a perfect binding, your brand new copy is ready to be opened for the first time.