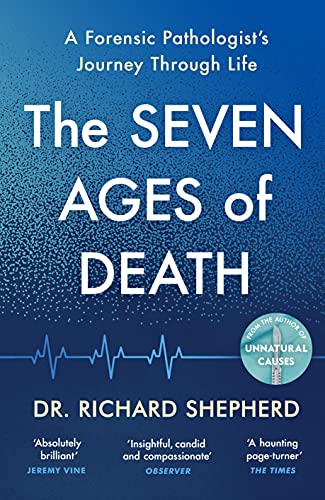 The Seven Ages of Death by Dr Richard Shepherd

The Seven Ages of Death: A Forensic Pathologist's Journey Through Life by Dr Richard Shepherd

As a medical detective, each autopsy he carries out is its own unique investigation, uncovering the secrets not only of how a person died, but also of how they lived.

Through twenty-four of his most intriguing, enlightening and never-before-told cases, Dr Shepherd shares autopsies that span the seven ages of human existence, and have taught him as much about the marvels of life as the inevitability of death.

From old to young, from murder to misadventure, and from illness to accidental death, each of these bodies has something to reveal: about human development, about mortality, about its owner's life story, about justice and even about Shepherd himself.

From the bestselling author of Unnatural Causes comes a powerful, moving and above all reassuring book about death as it touches our own lives - how to understand it, and, when our time comes (as it must), how to embrace it as the last great adventure.
_________

'An absolutely brilliant book. I really recommend it, I don't often say that but it's fascinating' Jeremy Vine, BBC Radio 2

Deeply insightful . . . Shepherd is unflinching in his self-dissection * The Times *
Praise for Dr Richard Shepherd * - *
One of the most fascinating books I have read in a long time. Engrossing, a haunting page-turner. A book I could not put down * The Times *
Heart-wrenchingly honest
Gripping, grimly fascinating, and I suspect I'll read it at least twice * Evening Standard *
A deeply mesmerising memoir of forensic pathology. Human and fascinating
An absolutely brilliant book. I really recommend it, I don't often say that but it's fascinating
Puts the reader at his elbow as he wields the scalpel * The Guardian *
Fascinating, insightful, candid, compassionate * Observer *

Richard Shepherd was born in West London but grew up in Watford. At the local grammar school he was introduced to a medical textbook smuggled into the classroom by a friend which opened his eyes to the world of crime and murder, setting him on a lifelong quest to understand death in its many forms. He trained as a doctor at St George's Hospital medical school at Hyde Park Corner, qualifying in 1977 and then completed his postgraduate training as a forensic pathologist in 1987. He immediately joined what was then the elite forensic department at Guy's Hospital.

He has been involved nationally and internationally in the forensic investigation of thousands of deaths from unnatural causes, from headline-making murders to mass natural disasters, and many sudden and unexplained deaths that his investigations showed were from natural causes or due to accidents. His skills and expertise still remain in demand around the world.

GOR011673235
9780241472033
0241472032
The Seven Ages of Death: A Forensic Pathologist's Journey Through Life by Dr Richard Shepherd
Dr Richard Shepherd
Used - Very Good
Hardback
Penguin Books Ltd
20210902
416
N/A
Book picture is for illustrative purposes only, actual binding, cover or edition may vary.
This is a used book - there is no escaping the fact it has been read by someone else and it will show signs of wear and previous use. Overall we expect it to be in very good condition, but if you are not entirely satisfied please get in touch with us
Trustpilot