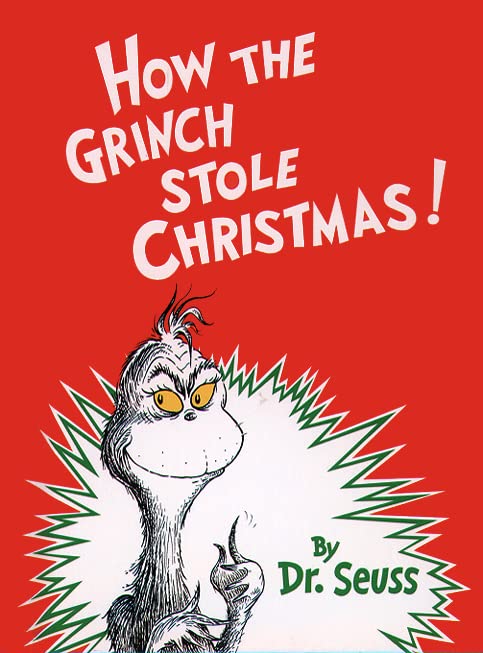 How the Grinch Stole Christmas!
by Dr. Seuss

How the Grinch Stole Christmas! Summary

How the Grinch Stole Christmas! by Dr. Seuss

With a heart two sizes too small, the disgruntled Grinch is the meanest creature you'll ever meet. But when he hatches a dastardly plot to steal Christmas from the citizens of Who-ville, he's in for a big surprise!

Now a blockbuster movie by Universal Pictures, starring the irrepressible Jim Carrey (of The Mask and The Trueman Story fame), directed by Ron Howard (Apollo 13 and Happy Days), and scripted by the writers of Who Framed Roger Rabbit. The video is also available.

How the Grinch Stole Christmas! Reviews

Theodor Seuss Geisel - better known to millions of his fans as Dr. Seuss - was born the son of a park superintendent in Springfield, Massachusetts, in 1904. After studying at Dartmouth College, New Hampshire, and later at Oxford University in England, he became a magazine humorist and cartoonist, and an advertising man. He soon turned his many talents to writing children's books, and his first book - And To Think That I Saw It On Mulberry Street - was published in 1937. His greatest claim to fame was the one and only The Cat in the Hat, published in 1957, the first of a hugely successful range of early learning books.

GOR000348114
How the Grinch Stole Christmas! by Dr. Seuss
Dr. Seuss
Used - Very Good
Hardback
HarperCollins Publishers
2002-10-12
64
0007141882
9780007141883
N/A
Book picture is for illustrative purposes only, actual binding, cover or edition may vary.
This is a used book - there is no escaping the fact it has been read by someone else and it will show signs of wear and previous use. Overall we expect it to be in very good condition, but if you are not entirely satisfied please get in touch with us.