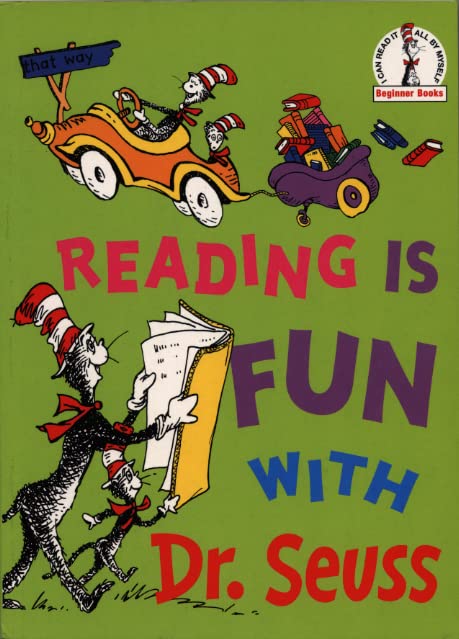 Reading Is Fun With Dr. Seuss
by Dr. Seuss

In his highly acclaimed Beginner Book series Dr. Seuss combines rhyme, rhythm and repetition with his unique style of zany artwork and off-the-wall humour to create a range of books that makes learning to read fun.

Reading Is Fun With Dr. Seuss by Dr. Seuss

In his highly acclaimed Beginner Book series Dr. Seuss combines rhyme, rhythm and repetition with his unique style of zany artwork and off-the-wall humour to create a range of books that makes learning to read fun.

Now available in paperback, here are four of his most wacky tales combined in one volume. Gloriously illustrated in full colour and packed with crazy nonsense and riotous rhyme, this book will encourage even the most reluctant child to learn to read.

Hop on Pop introduces readers to a range of 70 simple rhyming words, each used in short, humorous sentences. The nonsense escalates in Marvin K. Mooney Will You Please Go Now! as the reluctant Marvin is driven to go (presumably to bed!) by whatever means he can muster, be it on stilts, by mail, or even on a lion's tail.

With an increased vocabulary of over 150 words, Oh, The Thinks You Can Think! encourages readers to explore the fantasy world of their own imaginations. And by the time they turn to I Can Read With My Eyes Shut!, featuring the famous Cat in the Hat, children will almost be able to do just that!

Theodor Seuss Geisel - better known to millions of his fans as Dr. Seuss - was born the son of a park superintendent in Springfield, Massachusetts, in 1904. After studying at Dartmouth College, New Hampshire, and later at Oxford University in England, he became a magazine humorist and cartoonist, and an advertising man. He soon turned his many talents to writing children's books, and his first book - And To Think That I Saw It On Mulberry Street - was published in 1937. His greatest claim to fame was the one and only The Cat in the Hat, published in 1957, the first of a hugely successful range of early learning books known as Beginner Books.

GOR001109276
Reading Is Fun With Dr. Seuss by Dr. Seuss
Dr. Seuss
Used - Very Good
Paperback
HarperCollins Publishers
2001-11-05
176
0007112378
9780007112371
N/A
Book picture is for illustrative purposes only, actual binding, cover or edition may vary.
This is a used book - there is no escaping the fact it has been read by someone else and it will show signs of wear and previous use. Overall we expect it to be in very good condition, but if you are not entirely satisfied please get in touch with us.