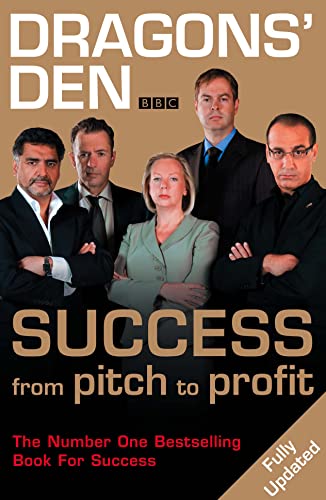 4 million people watch the Dragons on TV, now they can read their book.

Dragons' Den: Success, From Pitch to Profit by Duncan Bannatyne

4 million people watch the Dragons on TV, now they can read their book.

Joining them is James Caan, a new addition to the team in Series 5 which aired in September 2007. James is a multi-millionaire businessman and entrepreneur specialising in human resources consultancy and outsourcing. Here, for the first time, you can read his story and learn from his experiences. Plus you will find out exactly what James was looking forward to seeing in the Den.

Success, From Pitch to Profit is packed with advice for you, whether you want to perfect your pitching skills, develop an idea or make more money.

By looking back at the previous series of Dragons' Den, the Dragons will teach you how to develop an idea to its maximum potential, making you and your business reach new heights of success.

They will look at what's become of the contestants who entered the Dragons' Den. Some went away empty handed but have since become very successful. Others won the backing of the Dragons but failed to make their dream come through. The Dragons will use these case studies to show you what should have been done, what should have happened next and how you too could win their backing and become a business success. This paperback edition includes all new case studies from Series Five.

This is much more than a TV series companion. It is a solid business read with never-before-heard advice and personal experiences from the Dragons own business ventures. Between them, they have a wealth of knowledge and business acumen which they will exclusively divulge for the first time.

At last, we'll find out how they became millionaires, their secret business tactics, what drives them and what they would do if they entered the Dragons' Den.

This is a unique, accessible and fascinating business read straight from the Dragons' Den.

British multi-millionairess, Deborah Meaden launched her own glass and ceramics export company straight out of business college. Duncan Bannatyne began by trading in cars, but it was with an ice cream van that he changed the course of his life. Peter Jones' entrepreneurial journey started at the age of 16, when he founded a tennis academy. Richard Farleigh is a full time business angel who has possibly invested in more new UK companies than any other British investor. Theo Paphitis has turned Ryman, Contessa, La Senza and Partners the Stationers into successful and profitable retail businesses. James Caan is a serial entrepreneur and multi-millionaire. His business interests are human resouces consultancy and outsourcing. Evan Davis is a British economist and journalist and presents Dragons' Den on BBC Two.

GOR001161489
Dragons' Den: Success, From Pitch to Profit by Duncan Bannatyne
Duncan Bannatyne
Used - Very Good
Paperback
HarperCollins Publishers
2008-08-05
352
0007270828
9780007270828
N/A
Book picture is for illustrative purposes only, actual binding, cover or edition may vary.
This is a used book - there is no escaping the fact it has been read by someone else and it will show signs of wear and previous use. Overall we expect it to be in very good condition, but if you are not entirely satisfied please get in touch with us.