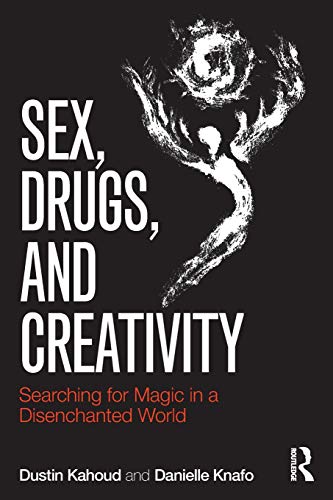 Sex, Drugs and Creativity: Searching for Magic in a Disenchanted World by Dustin Kahoud

In Sex, Drugs, and Creativity: The Search for Magic in a Disenchanted World, Kahoud and Knafo take a close look at omnipotent fantasies in three domains: sex, drugs, and creativity. They demonstrate how these fantasies emerge and how artists draw on them both to create and destroy-sometimes simultaneously - and how understanding this can help psychoanalysts work more effectively with these individuals.

Using the personal statements of influential artists and entertainers, in addition to clinical material, the authors examine the omnipotence of self-destruction as it contends with that of creative artists. The authors argue that creative artists use omnipotent fantasies to imagine the world differently - this enables them to produce their art, but also leaves these artists vulnerable to addiction. Chapters devoted to Stephen King and Anne Sexton demonstrate the ways these authors used drugs and alcohol to fuel imagination and inspire creative output while simultaneously doing harm to themselves. A detailed case study also demonstrates successful clinical work with a creative substance user.

Sex, Drugs, and Creativity will appeal to anyone interested in the links between creativity and substance use, and will be of great use to psychoanalysts and mental health practitioners working with these challenging clients.

Kahoud and Knafo explore the connection between sexuality, substance abuse, and creativity through a psychoanalytic lens, and they bring a fresh nuanced perspective that will inform psychodynamic practitioners as well as sophisticated readers. They elucidate the secret agendas behind sexuality and reach beyond behavior into a magical mystery tour of inner psychic experience. The case examples humanize the most extreme attempts to use sex as reparation for life's universal harshness and inevitable losses.

The existentialists have proposed that the lot for us humans is one of infinite thirst juxtaposed to essential limitation. Kahoud and Knafo understand this well. They trace the vicissitudes of this aspect of our human nature to earliest phases of childhood development. The authors stress the importance of omnipotent fantasies and attitudes as defenses against a sense of impermanence and powerlessness. The book is well written and clear, free of obscuring jargon, and offers critically important psychodynamic understanding to explain how sex, drugs and creativity can become such a compelling force in the lives of susceptible individuals.

This book is a tour de force! With delicious writing, it explores the relationships among early trauma, existential dread, omnipotent fantasy, and sexuality, drugs, and creativity. The reader learns how omnipotent fantasy is expressed in perversion, addiction, and creativity and how particular responses to our existential dilemmas can transform self-defeating behavior into positive, creative activity. Kahoud and Knafo led me to reflect deeply on how these dynamics operate within me and are relevant to my work with patients. I highly recommend this book.

Dustin Kahoud is a clinical psychologist with specialized training in the treatment of addictions. He has received postgraduate training in psychoanalysis and psychotherapy as a candidate at the Derner Institute, where he also teaches classes on addictions to psychology graduate students. Dustin Kahoud continues to write about the omnipotent fantasies that drive human behavior, and he maintains a private practice in Great Neck, NY. Danielle Knafo is a clinical psychologist and psychoanalyst. She is a professor at Long Island University and New York University. She has written and lectured extensively on the subjects of trauma, creativity, and sexuality. Her most recent book (with Routledge) is The Age of Perversion: Desire and Technology in Psychoanalysis and Culture.

Introduction: The Lure of Omnipotence

PART I: The Magical Imperative

Chapter One: The Sexual Illusionist: Sleeping with a Fantasy

Chapter Three: Mightier Than the Sword: The Magic of Creativity

PART II: Messages in a Bottle: Literary and Clinical Applications

Chapter Five: The Monsters and Magic of Stephen King

GOR010191446
Sex, Drugs and Creativity: Searching for Magic in a Disenchanted World by Dustin Kahoud
Dustin Kahoud
Psychological Issues
Used - Like New
Paperback
Taylor & Francis Ltd
2018-07-03
144
1138956090
9781138956094
N/A
Book picture is for illustrative purposes only, actual binding, cover or edition may vary.
The book has been read, but looks new. The book cover has no visible wear, and the dust jacket is included if applicable. No missing or damaged pages, no tears, possible very minimal creasing, no underlining or highlighting of text, and no writing in the margins.