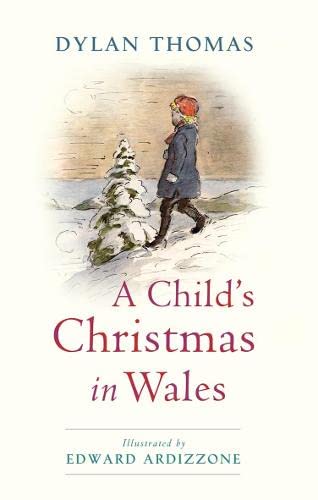 A Child's Christmas in Wales
by Dylan Thomas

In Stock
£2.69
Captures a child's eye view of a magical Christmas Day in a small Welsh town, with uncles and aunties, sing songs, presents (some useful, some not) and lots of snow.
Very Good Good
7 in stock

A Child's Christmas in Wales Summary

A Child's Christmas in Wales by Dylan Thomas

Dylan Thomas, one of the greatest poets of the twentieth century, captures a child's eye view of a magical Christmas Day in a small Welsh town, with uncles and aunties, singsongs, presents (some useful, some not) and lots of snow. The beautiful, lyrical prose is vividly brought to life by Edward Ardizzone's wonderful line illustrations. This modern classic which celebrates 50 years since first publication, will delight everyone with its marvellous tales of the fun and excitement of what it is like to be a child at Christmas.

A Child's Christmas in Wales Reviews

Dylan Marlais Thomas was born in 1914 in Swansea. His father was senior English master at the Grammar School, where Dylan Thomas received his only formal education before becoming for eighteen months a reporter on the local newspaper. His early poetry matured quickly in private notebooks, and in 1934 saw the publication of the twenty-year-old's first volume, 18 Poems. Thereafter, bohemian literary life in London alternated with some more positively creative periods back in Wales, but his London reputation also laid the base for a celebrated career in the 1940s and early 1950s as a writer for radio and film. Meanwhile, his second and third volumes - Twenty-five Poems (1936) and The Map of Love (1939) - consolidated his standing as a poet. In 1937 he married Caitlin Macnamara and in 1938 settled for the first time in Laugharne, the Camarthenshire seaside village now most closely associated with his name, and a profound influence on his final works. Even at the end of the 1930s, holiday memories of rural Camarthenshire joined native urban memories of Swansea in the autobiographical short stories of Portrait of the Artist as a Young Dog (1940). The relatively few poems written during the war years are still among the finest anti-war poems of the century; and 1944-5, spent partly at New Quay on the Cardiganshire coast, was an annus mirabilis of remembrances of childhood in poetry and prose. Deaths and Entrances in 1946 confirmed his status as a major lyric poet. Between 1946 and 1949, with proximity to London for film and broadcasting work, the family lived in or near Oxford. 1949 saw a return to Laugharne, to the now famous Boat House. From 1950 on, the poet's attention was given mainly to completing Under Milk Wood, a 'Play for Voices' that had grown out of his work for radio and film, and from his experience of New Quay and Laugharne. His growing renown led to four lecturing tours of the United States, where a collection of late poems, In Country Sleep, was published in 1952. The same year saw the publication of his Collected Poems 1934-1952, to wide acclaim. Under Milk Wood received its first readings with actors at the Poetry Center of the Young Men's and Young Women's Hebrew Association in New York in May and October 1953. Dylan Thomas died in New York on 9 November 1953 from excessive drinking and medical mistreatment. He is buried at Laugharne.

GOR001141168
A Child's Christmas in Wales by Dylan Thomas
Dylan Thomas
Used - Very Good
Paperback
Penguin Books Ltd
1996-10-03
64
0140377239
9780140377231
N/A
Book picture is for illustrative purposes only, actual binding, cover or edition may vary.
This is a used book - there is no escaping the fact it has been read by someone else and it will show signs of wear and previous use. Overall we expect it to be in very good condition, but if you are not entirely satisfied please get in touch with us.