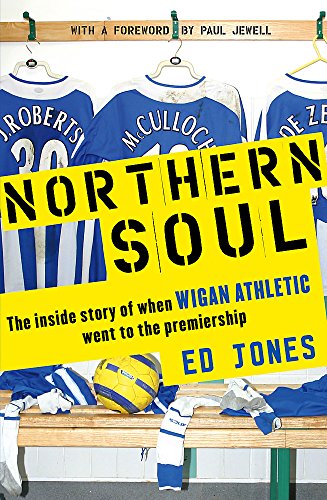 In Stock
£4.99
The Glory Game for the Noughties -- an inside look at the Premiership from inside its strangest member -- Wigan Athletic
Very Good
Only 3 left

In 1972, Hunter Davies wrote one of the defining sports books, The Glory Game, in which he chronicled a season from inside a leading football club -- Tottenham Hotspur. Now, three decades on, and with the Football League now the money-spinning Premiership, Ed Jones has been granted similar access all areas to the latest, and perhaps oddest recruit to the top flight: Wigan Athletic.

When Hunter Davies was writing The Glory Game, Wigan were still a non-league club. For the first time in their existence, they're rubbing shoulders with the big boys, kicking off with a home game against Chelsea and finishing with an away trip to Arsenal. In between, Ed Jones will be chronicling what it is really like behind the scenes of a Premiership club -- from the players to the tea ladies, the dug out to the chairman's helicopter.

Whichever way you look at it, the rise and rise of Wigan Athletic is one of the most extraordinary stories in modern day football ... let nobody forget just what a fabulously improbable beginning Wigan have made to life at the top * GUARDIAN *
Jones records the season of wonderment with wit, self-deprecation, insight and knowledge. Peerless * DAILY TELEGRAPH *
Genuinely informative without ever becoming dry ... human and humorous ... warm-hearted * WHEN SATURDAY COMES *
Meticulous, heartfelt and fair, this admirable account of a season deserves a readership beyond just Latics fans. * FOUR FOUR TWO *

GOR001174659
Northern Soul: One Little Club's Big Adventure by Ed Jones
Ed Jones
Used - Very Good
Paperback
Little, Brown & Company
2006-09-07
288
0316732516
9780316732512
Short-listed for British Sports Book Awards 2007 (UK)
Book picture is for illustrative purposes only, actual binding, cover or edition may vary.
This is a used book - there is no escaping the fact it has been read by someone else and it will show signs of wear and previous use. Overall we expect it to be in very good condition, but if you are not entirely satisfied please get in touch with us.