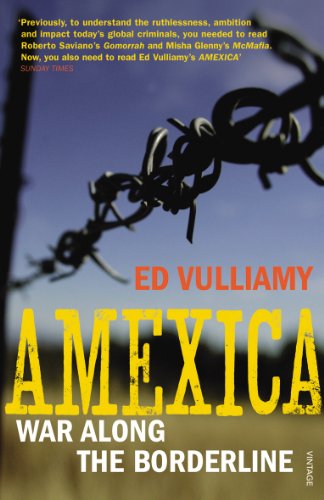 In Stock
£4.49
This is both the busiest and most deadly frontier in the world, studded with guard-posts, infra-red searchlights and heavily armed patrols.Across it unfolds a war that is scarcely reported - a war that's being fought, with thousands dying and millions of lives blighted, so that Europe and America can get high.
Very Good
6 in stock

Amexica: War Along the Borderline by Ed Vulliamy

In the last three years more than 38,000 people have been murdered in Amexica - the area of land that forms the border between the US and Mexico. This is both the busiest and most deadly frontier in the world, studded with guard-posts, infra-red searchlights and heavily armed patrols.Across it unfolds a war that is scarcely reported - a war that's being fought, with thousands dying and millions of lives blighted, so that Europe and America can get high. In Amexica, acclaimed journalist Ed Vulliamy explores his own love-hate relationship with the place and its people, while investigating the causes and consequences of the war and its impact on the everyday life which somehow carries on around it.

"Previously, to understand the ruthlessness, ambition and impact of today's global criminals, you needed to read Roberto Saviano's Gomorrah and Misha Glenny's McMafia. Now, you also need to read Vulliamy's Amexica" -- Brian Schofield * Sunday Times *
"The most vivid book published so far in English on the bloody calamity that has been visited on Mexico's northern borderlands... This is a fascinating introduction to the bloody last act of the 'war on drugs'" * Observer *
"Vulliamy writes like a latter-day Graham Greene... Like all good travel writing, Amexica is vivid, colorful and exotic, filled with striking vignettes and larger-than-life characters" * New York Times *
"This absorbing odyssey along the Mexican-American border gives pause for thought to anyone who ignores the side-effects of cocaine... Vulliamy's reporting is faultlessly brave... The scenery and characters he meets are brought alive with vividness and intensity" * Daily Telegraph *
"Vivid social reportage... An extraordinarily powerful work" * Spectator *

Ed Vulliamy is a journalist and writes for the Guardian and Observer. For his work in Bosnia, Italy, the US and Iraq he has won a James Cameron Award and an Amnesty International Media Award and has been named International Reporter of the Year (twice) and runner-up at the Foreign Press Association Awards. In 1996 he became the first journalist to ever testify at an international crimes court, at the International Criminal Tribunal for former Yugoslavia. A believer in the duty of journalists to testify in matters of humanitarian law, he has since lectured extensively on the subject. Twitter: @edvilliamy.com

GOR003548239
Amexica: War Along the Borderline by Ed Vulliamy
Ed Vulliamy
Used - Very Good
Paperback
Vintage Publishing
2011-10-06
416
0099546566
9780099546566
N/A
Book picture is for illustrative purposes only, actual binding, cover or edition may vary.
This is a used book - there is no escaping the fact it has been read by someone else and it will show signs of wear and previous use. Overall we expect it to be in very good condition, but if you are not entirely satisfied please get in touch with us.