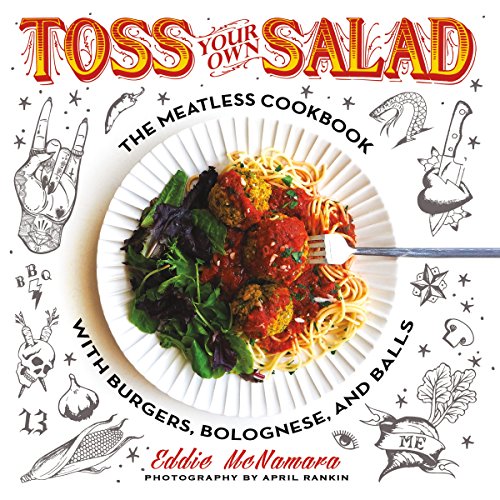 Toss Your Own Salad
by Eddie McNamara

Toss Your Own Salad Summary

Toss Your Own Salad: The Meatless Cookbook with Burgers, Bolognese, and Balls by Eddie McNamara

Takeout food every night is great... for leaving you broke, bloated, and praying for a national healthcare plan to deal with your fat ass self. Eddie McNamara wants to show you how to stop being a takeout junkie or a Gordon Ramsay wannabe who spends years learning complex knife skills you don't need. He also wants to show you how to pump up the flavour without resorting to using meat because - really - who needs to eat more meat? As Eddie puts it, "Any schmuck can put bacon on something to make it delicious." He wants to show people how easy it was to cook delicious meatless meals for themselves rather than gorging on more fat and salt on a daily basis than you'd see in a bucket of KFC. He also wants to show people that you don't have to be Warren Buffett to eat well. As Eddie says, "Brokesters have cooked filling plant-based food since long before Mark Bittman moved to Berkeley in search of a perfectly ripe avocado." That's how his popular Tumblr, "Toss Your Own Salad," got started and now morphed into this awesome meatless cookbook that will get you to rock out over 100 recipes for dishes like The Green Inferno Salad, Dr. Devash's Shakshuka, Nihilistic Frittata, and Penne Tikka Masala with an Eddie-curated soundtrack that spans the musical range from Metallica's "Creeping Death" to Gene Vincent's "Be-Bop-a-Lula." So, stop wasting your money. Do it yourself. Let Eddie McNamara show you how to Toss Your Own Salad.

Toss Your Own Salad Reviews

"Eddie comes on strong, but behind the attitude there's an honest, stripped-down, back-to-basics approach to cooking real food. If you ever wanted to go from watching cooking shows to actually cooking, this is where you begin." - Amanda Cohen, author Dirt Candy: A Cookbook and chef/owner of the famous NYC vegetarian restaurant of the same name

"Hilarious and heartwarming, this straight-talking, contemporary vegetarian cookbook is the polar opposite of lifestyle guides that rhapsodize about superfoods and microgreens."--Library Journal

Eddie McNamara was born and raised in Brooklyn, New York (before it was cool). A former Port Authority cop, he served on the post-9/11 World Trade Center rescue/ recovery team. After leaving the police force and graduating from the Natural Gourmet Institute in New York, he interned for chef Amanda Cohen at her boundary-pushing vegetarian restaurant, Dirt Candy, and worked as a recipe tester and developer for InStyle, HGTV, and Women's Health magazines. Inspired by Brooklyn food, which has roots all over the globe, he shares his vegetarian recipes on his Tumblr page, "Toss Your Own Salad." He lives with his wife in a tiny Manhattan apartment, and no, he's not moving to Portland. Toss Your Own Salad is his first cookbook.

GOR009970686
Toss Your Own Salad: The Meatless Cookbook with Burgers, Bolognese, and Balls by Eddie McNamara
Eddie McNamara
Used - Very Good
Paperback
St Martin's Press
2017-12-15
256
125009920X
9781250099204
N/A
Book picture is for illustrative purposes only, actual binding, cover or edition may vary.
This is a used book - there is no escaping the fact it has been read by someone else and it will show signs of wear and previous use. Overall we expect it to be in very good condition, but if you are not entirely satisfied please get in touch with us.