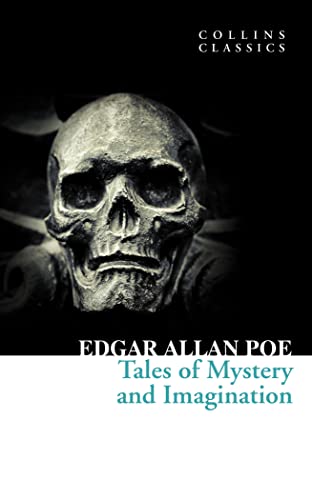 Tales of Mystery and Imagination
by Edgar Allan Poe

Tales of Mystery and Imagination Summary

`Yet I am not more sure that my soul lives, than I am that perverseness is one of the primitive impulses of the human heart - one of the indivisible primary faculties, or sentiments, which gives direction to the character of Man.'

Including Poe's most terrifying, grotesque and haunting short stories, Tales of Mystery and Imagination is the ultimate collection of the infamous author's macabre works.

Considered to be one of the earliest American writers to encapsulate the genre of detective-fiction, the collection features some of his most popular tales.`The Gold-Bug' is the only tale that was popular in his lifetime, whereas `The Black Cat', `The Pit and the Pendulum' and `The Murders in the Rue Morgue' became more widely read after his death.

Focussing on the internal conflict of individuals, the power of the dead over the living, and psychological explorations of darker human emotion that appear to anticipate Sigmund Freud's later theories on the psyche, Poe's Gothic terror stories are considered masterpieces the world over.

GOR004282635
Tales of Mystery and Imagination (Collins Classics) by Edgar Allan Poe
Edgar Allan Poe
Collins Classics
Used - Very Good
Paperback
HarperCollins Publishers
2011-01-01
512
0007420226
9780007420223
N/A
Book picture is for illustrative purposes only, actual binding, cover or edition may vary.
This is a used book - there is no escaping the fact it has been read by someone else and it will show signs of wear and previous use. Overall we expect it to be in very good condition, but if you are not entirely satisfied please get in touch with us.