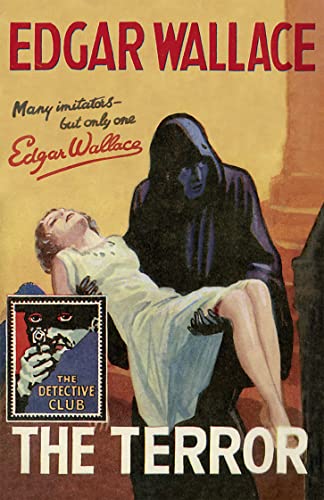 The Terror
by Edgar Wallace

The sensational novel which launched Collins' Detective Story Club in 1929 was by Edgar Wallace, who wrote more crime stories in the 1920s, and more films, than any other author. This new edition of The Terror, with its original jacket artwork, also includes another classic Wallace text, White Face.

The sensational novel which launched Collins' Detective Story Club in 1929 was by Edgar Wallace, who wrote more crime stories in the 1920s, and more films, than any other author. This new edition of The Terror, with its original jacket artwork, also includes another classic Wallace text, White Face.

A dangerous gang of criminals is imprisoned after a daring robbery, although the ringleader who masterminded the crime disappears with the loot. Finally released after ten years behind bars, they are out for vengeance on the man who betrayed them, and the trail leads to a lonely house haunted by organ music and the spectre of a hooded figure who prowls its dark corridors.

The Terror began life as a stage play, then a film, and finally the book that began Collins' Detective Story Club in July 1929.
This new edition also includes White Face, the other crime novel Wallace adapted from one of his own plays. A doctor finds a man murdered in a seedy part of London. The police suspect a notorious master of disguise known as `White Face', and the doctor enlists a reporter to help him track down and unmask the elusive killer.

This Detective Story Club classic is introduced by award-winning crime novelist and mystery genre expert Martin Edwards, author of the acclaimed The Golden Age of Murder.

"Edgar Wallace became a habit. It was with some not a point of honour but a plain need to read every story that he wrote." THE TIMES

"Attractively bound in black and gold, with vivid coloured jackets, these books are bound to be immensely popular." DAILY MIRROR

Edgar Wallace was Britain's most prolific crime writer, with more than 170 novels, two dozen plays and almost a thousand short stories to his name. His work has been made into at least 160 films, but he is best remembered today for writing the original story for King Kong just before he died in 1932 aged 56.

GOR007310646
The Terror (Detective Club Crime Classics) by Edgar Wallace
Edgar Wallace
Detective Club Crime Classics
Used - Very Good
Hardback
HarperCollins Publishers
2016-02-25
304
0008137579
9780008137571
N/A
Book picture is for illustrative purposes only, actual binding, cover or edition may vary.
This is a used book - there is no escaping the fact it has been read by someone else and it will show signs of wear and previous use. Overall we expect it to be in very good condition, but if you are not entirely satisfied please get in touch with us.