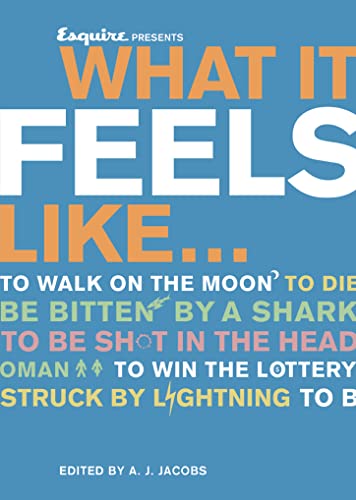 What It Feels Like
by Edited by A. J. Jacobs

What It Feels Like by Edited by A. J. Jacobs

Just taking a stab here, but in all likelihood, you've never walked on the moon. You've probably never won a Nobel prize, been swept up in a tornado, gone over Niagara Falls in a barrel, or been mauled by a ferocious animal.

Not to worry. We're here to help. Thanks to Buzz Aldrin, we can share with you what it's like to stomp your boots on the fine talcum powder that covers the moon. Thanks to a California spearfisher named Rodney Orr, we can describe the crunch of a great white shark chomping down on your head. Sir Ranulph Fiennes will tell you what it feels like to black-and-decker your own frost-bitten fingers off, while actor Gabriel Pementel will tell you all about being 2'11" tall...So sit back, turn the page, and read what these extraordinary people went through for you...

`What It Feels Like to Be Stuck in a Tornado':
`As the old joke goes, in Mississippi, divorces and tornadoes have one thing in common. Somebody's gonna lose a trailer...'

`What It Feels Like to Get Frostbite':
`...So I used a Black & Decker vice and a saw in the toolshed. It wasn't too painful, but going through the bone was quite difficult...'

`What It Feels Like to be Really, Really Tall':
`In high school I was 7'6" already...if we went to a mall or something, I was the place that you'd meet at. Everyone knew where I was. They'd say, "Let's meet at Shawn"...'

`What It Feels Like to be Bitten by a Venomous Snake':
`...She must have smelled the mice and rats on me because she sunk her fangs into my right forearm, just below the elbow...'

About Edited by A. J. Jacobs

A.J. Jacobs is a senior editor at US Esquire magazine.

GOR000801163
What It Feels Like by Edited by A. J. Jacobs
Edited by A. J. Jacobs
Used - Very Good
Paperback
HarperCollins Publishers
2003-10-20
176
0007177399
9780007177394
N/A
Book picture is for illustrative purposes only, actual binding, cover or edition may vary.
This is a used book - there is no escaping the fact it has been read by someone else and it will show signs of wear and previous use. Overall we expect it to be in very good condition, but if you are not entirely satisfied please get in touch with us.